Loitering with intent: The life of Chaplain Mike Wright remembered 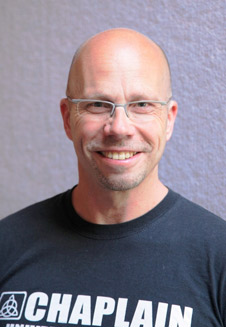 The service, held in the University’s College of Education Auditorium, was attended by hundreds and also livestreamed for friends and colleagues around New Zealand and the globe who could not be there in person.

In addition to waiatas from the College of Education, and singing by the Pacific Islands Centre, more than 15 people spoke at the service – remembering a kind, calm, compassionate, witty, positive, generous and thoughtful man, who was always available to listen and help those in need.

Mike was the Chaplain for the Polytechnic and the University for 15 years, beginning in 2003. He always wore a black tee shirt with his own motto printed on the back: “Loitering with intent”.

He was remembered as the “cool chaplain”, the “hot chaplain”, “Holy Mike”, and for his ever present long black coffee, strong muscles, bald head and warm smile.

In his role as chaplain he provided confidential and non-judgmental pastoral support and encouragement to all students and staff, either as individuals or in groups. He enjoyed working with people as they considered the spiritual dimension of their lives and how it might enhance their life experience as a student or staff member.

No stranger to life as a student, he had undergraduate degrees in Science and Theology and a postgraduate diploma in tertiary teaching. He was also part-way through his Doctorate in Education, exploring first-year students’ understandings and experiences of spirituality.

Alongside this he was an experienced Spiritual Director, independent marriage celebrant, Justice of the Peace, husband, and father of three.

"Mike decided on his slogan ‘Loitering With Intent’ in his early days as a chaplain, and it was ideal for him and summed up so much of what he was: always available, always with the intent of offering ministry and care."

During the memorial service, fellow Chaplain Greg Hughson described the huge gap Mike’s death leaves in the chaplaincy team, their lives and their ministry.

The Chair of the Chaplaincy Board, Professor Paul Trebilco was unable to be present but his eulogy was read by Professor David Fielding on his behalf. Paul described Mike as an “ideal chaplain”.

“He was great with people, he was great at building relationships, and he was a great listener. He gave people space to talk, to come to terms with things, to hear God speaking into their situations. In his own quiet, unassuming way he would journey with people.

“Mike decided on his slogan ‘Loitering With Intent’ in his early days as a chaplain, and it was ideal for him and summed up so much of what he was: always available, always with the intent of offering ministry and care.”

Most of those who spoke thanked Mike’s wife Sheryl and his children Emma, Brittany and Taylor for sharing their husband and father with the University and Polytechnic.

“Please know that our thoughts and prayers are with you and we are wishing you as much peace as is humanly possible in this very difficult time in your lives.”

She said while Mike’s life was cut “way too short” it was a life well lived, and that he had made an extremely valuable contribution to both the University and Polytechnic communities.

“He was a warm and caring man with a remarkably positive outlook on life, a man who willingly shouldered other people’s pain. So today, as a community, we find ourselves grieving for a man who so gracefully helped us make our way through so much grief. At our own time of sadness we would do well to model Mike’s kindness, his faith and his strength, as we help his family, our Chaplaincy team and our University and Polytech communities find a way to carry on.”

"At our own time of sadness we would do well to model Mike’s kindness, his faith and his strength, as we help his family, our Chaplaincy team and our University and Polytech communities find a way to carry on."

As well as touching the local community, Mike touched others around the world.

A chaplain from Australia’s Flinders University David Williamson spoke on behalf of the international network of tertiary chaplains and university chaplains.

He lit a candle on behalf of this network, telling Mike’s family to “know that you are deeply loved and cared for by a web that reaches around this world.”

Otago Polytechnic Deputy CEO Chris Morland described the immense contribution Mike made to his institution over the past 15 years.

“He touched lives of so many of us at the Polytech, as a councillor, a critical friend, a spiritual adviser, a JP, a guide and mentor, he had many roles.

“He went about his work purposefully, yet quietly, supporting people whatever their beliefs, never pushing his own beliefs.”

Among others who spoke were Rev Dr Tokerau Joseph of Dunedin Ministers and Churches, Anna Seiuli a Counsellor/Student Advisor-Pasifika at Otago Polytechnic, the University’s Director of Student Services Karyn Thompson and representatives from the University’s College of Education, including Mike’s PhD supervisor.

Near the end of the service, Mike’s daughter Brittany spoke on behalf of her family, thanking those who attended and commenting that the number of people at both the memorial and Mike’s funeral showed how “incredibly loved” her father was.

A teacher, she remembered visiting her father between lectures at the College of Education, sharing a coffee and chatting.

She told the service how lucky she and her two siblings felt when they each graduated, getting to walk with their father in the graduation parade, and then receiving a solo standing ovation from him as they were capped.

“We used to joke that people who didn’t know he was our dad, must think we needed some serious help, given how often we visited the chaplain’s office,” she said.

"We thank you from the bottom of our hearts for that love, compassion and generosity that you have shown our family."

“Mike Wright, Holy Mike, The Chaplain, My Dad: had the most incredible ability to make you feel like when you were with him you were the most important person in the world. He made you feel safe, he made you feel valued and you knew he cared.

“Mike Wright, Holy Mike, The Chaplain, My Dad: was patient, he listened to you, he sat with you, and he never rushed or pressed you. He was calm and kind and gently showed you where you needed to go.”

She said while their hearts were broken, her family was grateful for the love and compassion shown to them by others following Mike’s death.

“Each and every one of you loved Dad and felt loved in return.

“The only saving grace in this tragedy is that my family and I have witnessed what Dad truly believed, that this world is filled with good people and so much love.

“We thank you from the bottom of our hearts for that love, compassion and generosity that you have shown our family. It has been truly overwhelming and while nothing will come even close to filling the hole that losing Dad has left in our hearts we can take this lesson of how precious life can be and cherish it. We can strive to be good and kind and just. We can strive to be more like our hero. Our dad.”

Fellow chaplains Greg Hughson and Mark Chamberlain closed the service with a prayer.