This week is New Zealand’ Mental Health Awareness Week – with the national theme “Nature is Key”. To mark the week, staff members from across the University have kindly agreed to share their own mental health stories. In the second of a three-part series the Otago Bulletin Board hears from Senior Psychology Lecturer Dr Damian Scarf. 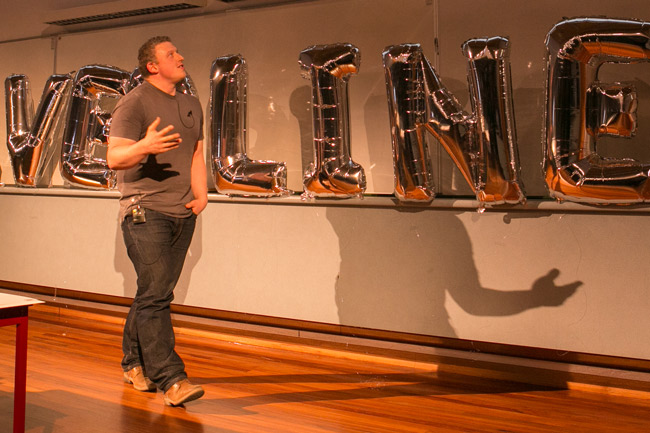 Senior Psychology Lecturer Damian Scarf has become a public face of depression and anxiety in recent years – speaking out about his own battles in the hope it will help to normalise discussions around mental health.

In 2016 he appeared in the National Depression Initiative website, sharing his story:

He believes that by telling others what he went through, he can help them feel less alone.

“Mental health issues can be extremely isolating. Letting other people know that you have experienced what they might currently be experiencing I think provides a great deal of comfort to that person. It also lets them know that things can change. I think anxiety and depression live off an absence of hope.”

That lack of hope was certainly the case for Dr Scarf. He is now a highly successful researcher and academic. But being a student wasn’t easy for him. Indeed, each of his four undergraduate years saw him sucked deeper and deeper into a debilitating anxiety – dropping all of his support networks on the way.

He described this process in a 2015 Tedx Talk:

“Having failed high school, I was anxious to pass. My first year was good. I passed with a mix of Cs and Bs. I wanted to do better. In second year I no longer had time to hang out with friends. One group down.

“In second year I got a mix of As and Bs. This wasn’t good enough. I felt like I was a failure. I needed to do better. At the start of third year I quit rugby. A second group down.

“In first semester I got all As. Again, this wasn’t good enough, so I cut my family off. A third group down.

“My anxiety controlled me. Any time that I was not studying my head was filled with noise… about being a failure, about not working hard enough.

“In third year my anxiety also extended its focus to my physical appearance. I was bulimic. I was regularly binging and making myself throw up. I was getting up at 6am to go for runs. I would get to the library before it opened at 8am, study until it closed at 11pm, and then cycle home. I kept this schedule seven days a week, using the 24 hour computer labs when the library was not open. I dropped around 25kgs that year. Before the year was out I was admitted to hospital. I did not make it through my exams.

"In fourth year it got worse. Now I was getting up between 3 and 4am, studying until 6am, going for a run, getting to the library before it opened at 8am, studying till it closed at 11pm, and then cycling home."

“In fourth year it got worse. Now I was getting up between 3 and 4am, studying until 6am, going for a run, getting to the library before it opened at 8am, studying till it closed at 11pm, and then cycling home.

“I held the hope that at the end of fourth year my anxiety would abate. That without any more exams to worry about I would return to normal. I told myself that if the anxiety did not pass I would end my life.

“The anxiety did pass, but only to make way for depression. Eliminating all those groups had created a hole and now, without study and exams to fill it, depression did. That was when I first got help. It was also when I started the process of restabilising those connections that I cut. I don’t think maintaining the connections would have saved me from developing anxiety and depression but I definitely think it would have reduced their impact, I would have been more resilient.”

These experiences have fed into Dr Scarf’s current research – both his approach and his subject matter.

“With respect to my approach to research, my experiences have led me to really value the relationships I have with my collaborators. The people I collaborate with are not just people I conduct research with, they are friends and people that I talk to about a great deal of things other than research. I spend time with them outside of University.

“The fact is, when you have mental health challenges, you need those relationships. They understand that if a due date for a grant passes by that, in the grand scheme of things, it is not a big deal. Not ideal but not a big deal. Sometimes that perspective is difficult to have in a university environment and I am glad that I have people around me that provide that perspective when I struggle to see it.”

"The fact is, when you have mental health challenges, you need those relationships."

In terms of the actual research he conducts – his experiences have led him to focus more and more on ways to improve mental health and well-being in adolescents and young adults.

Together with friend and colleague Associate Professor Jackie Hunter, Dr Scarf’s research utilises the Social Identity Approach to Health (SIAH) framework, which basically holds that social identities (i.e., the identities we have in all the different groups we may belong to) give people a place in the world and thereby also furnish them with a sense of purpose and meaning.

“Even more than that, the framework holds these relationships are critically important to our health and well-being. I lost all my groups throughout my undergrad and now I try to use my research to show just how important those groups really are.”

“I still remember telling my PhD supervisor, Professor Mike Colombo, about my mental health issues. At that time my mental health was very poor and I also happened to be on a very difficult project. When I told Mike, he said we could drop the project and come up with something else. That was lifesaving.

“There was a time during my postdoc when my mental health was very poor. I remember telling my postdoctoral supervisor, Professor Harlene Hayne, that I could not work and that I did not think my mental health was going to improve, I basically told her I wanted to quit. She reassured me that I had been doing great, that my mental health would improve, and that there was no way I was quitting my job. That was extremely reassuring, when you are in that hole it really feels like things will never change and having someone like Harlene reassure me that it would gave me hope.”

"If people are struggling then they need to know that it is ok for them to share that with you."

In his current role, as well as having Professors Colombo and Hayne on his side, he also has Associate Professor Hunter and Professor Ted Ruffman.

“Whenever I am going through a tough time they are there to talk to. I am extremely lucky to have them both.”

His advice to those approached by someone dealing with mental health issues is simple: Listen.

“If people are struggling then they need to know that it is ok for them to share that with you. You are not expected to be their therapist but there should be the expectation that you are open to people coming to you and telling you they are not in a good place mentally.”

Yesterday Philosophy's Sally Holloway shared her story in the first part of our Mental Health Series.

Mental Health support at the University of Otago - what is available?

Often the best place to seek support is the place you feel most comfortable and build it up from there.