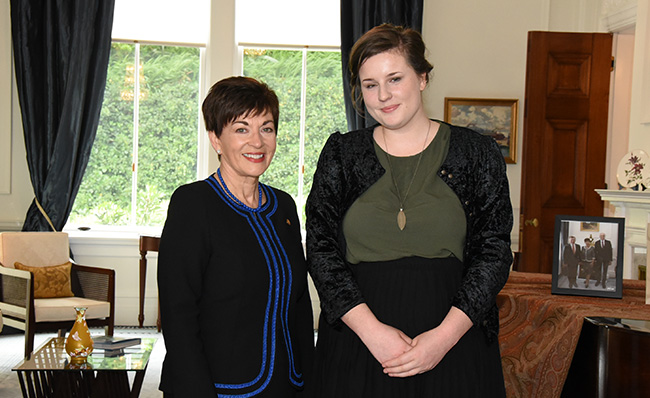 The best way to end a year of career highlights is to win one of the most prestigious scholarships in the academic world, and 2017 Oxford Rhodes Scholar Jean Balchin says she can’t wait to get started.

“I’ve wanted to go to Oxford since I was a little girl sleeping in my father’s library and stumbling over the book titles when I couldn’t sleep.”

The Rhodes Scholarship is the oldest and perhaps the most prestigious international graduate scholarship programme in the world. Established in 1903 under the will of Cecil Rhodes, the scholarships are postgraduate awards supporting outstanding all-round students at the University of Oxford and providing transformative opportunities for exceptional individuals.

Deciding to apply for the Rhodes scholarship was one thing, but Jean explains that getting through the application process was entirely another.

“I’ve wanted to apply for the Rhodes scholarship since I was in year 10 and decided I’d like to study overseas. Dr Merata Kawharu (Associate Professor of Research at Te Tumu) was incredibly encouraging and supportive throughout the whole process. She’s a Rhodes scholar herself and knows how draining and intensive (yet ultimately rewarding) it is to apply. I honestly couldn’t have done it without her.” 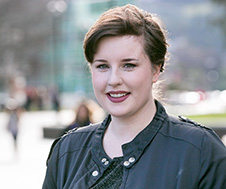 Jean says she is "really excited" to surround herself with Oxford's history. Photo: Sharron Bennett.

The application process had a few stages – a personal essay explaining her background and why she should be considered for the scholarship, as well as her CV, references and academic transcript.

“Then the first round of interviews was held at Otago University and I must admit, I was incredibly nervous for this. However, all the panellists – including the Pro-Vice-Chancellor Tony Ballantyne, Professor Poia Rewi (Te Tumu School of Māori, Pacific and Indigenous Studies) and Professor Lisa Matisoo-Smith (Department of Anatomy) – were incredibly nice and friendly. I felt at ease after a while, and we had a thought-provoking discussion about a number of subjects.”

Jean’s area of research and fascination with science communication and New Zealand history comes from her childhood experiences in a home-schooling programme called Accelerated Christian Education (ACE), where she was taught that scientific truth was “all lies conjured up by leftist, tree-hugging hippies seeking financial gain from environmentalism.”

Finally free of this religious dogma in high school, she was determined to convey truth about the world through literature and science.

“Having grown up in a cloud of dogma and misinformation, I firmly believe that I have an obligation to accurately report scientific research.”

Her area of research for her Oxford studies will be examining the perversion of Darwinism in the writings of European colonialists, relying on the theoretical models of new historicism, Darwinian literary studies and post-colonialism.

“I believe my research has great relevance to present day New Zealand, as the Darwinian concept of “survival of the fittest” has long been used to explain and justify status inequalities between different ethnic populations. Sadly, it is not uncommon to hear people claim that the poor socio-economic status of Māori, for example, is due to the biological nature of Māori themselves.” 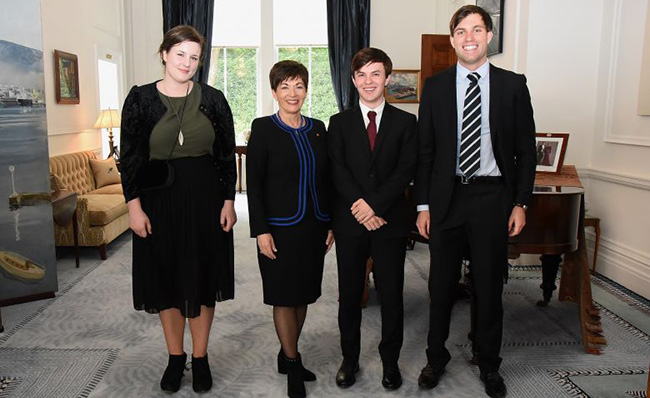 Jean with the Governor-General Her Excellency The Rt Hon Dame Patsy Reddy, and other Rhodes scholars Jamie Beaton from Harvard University, and Marco de Jong from the University of Auckland. Photo: Universities NZ.

The Rhodes Scholarships are awarded to students who excel not only academically, but in extra-curricular and community initiatives, something that Jean knows plenty about.

“I really enjoy my volunteer work with Otago Access Radio, Nexus Magazine, and the Life Matters suicide prevention trust, but to be honest, I don’t consider it 'work'."

“I also love my studies in English Literature and Art History,” Jean says.

“My venture into science journalism was also challenging yet great fun this year, and so while everything has been time-consuming, it has also been highly enjoyable.”

Receiving the Rhodes scholarship is something that Jean has been working towards for a very long time, and says she has many people to thank.

“First and foremost, I'd like to thank my Aunt Elly and my Uncle Ken for being so incredibly supportive and putting up with my ranting and raving throughout the whole process. I was literally in hospital a week before I had to hand in my application, and my Aunt was with me every step of the way, changing my bandages, feeding me, and making sure I was comfortable. She lent me clothes for the interview and was just so loving and encouraging.

As previously mentioned, I'd like to thank Dr Merata Kawharu for the invaluable support she provided me. She made me feel so valued and worthy of this scholarship. I'll never forget how lovely she was.”

Jean hopes to head overseas in April or May next year to make the most of the UK summer - “however underwhelming that may be!” - and familiarise herself with Oxford and the surrounding area before she starts studying.

“I’d also like to do a bit of traveling around Eastern Europe and catch up with some friends from a previous student exchange in Edinburgh, as I won’t start at Oxford until October.”

Jean says she is excited to learn in such a “conducive and amazing academic environment.”

“Oxford has arguably the best English department in the world, as well as incredible resources in the Bodleian Library and excellent one-on-one tuition. I'm really excited to be part of such an incredible academic tradition.”

“I also can’t wait to have a drink at the Eagle and Child, where my heroes JRR Tolkien and C. S. Lewis drank!”

You can read more about the 2017 Rhodes scholars here, and find out more about Jean's studies and internship with Science Media Centre of New Zealand here.