The winners of the 2017 Division of Sciences Excellence Awards. 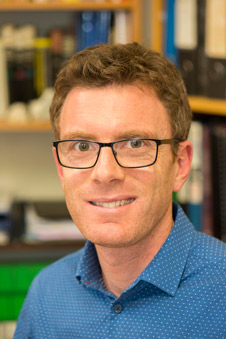 Stressful, difficult and time-consuming. Three words you wouldn’t expect to hear from the winner of this year’s Division of Sciences Early Career Teacher of the Year when asked to describe teaching.

But it’s precisely because he feels teaching doesn’t come naturally to him, that Dr James Scott of Geology puts in so much effort into his preparation.

“Winning this award was really pleasing because it is an acknowledgment of the hard work put in,” Dr Scott says.

Dr Scott, who became a full-time lecturer at Otago in 2014, was one of 15 individuals or groups to be recognised in this year’s Division of Sciences Excellence Awards last month.

The annual awards, introduced three years ago, celebrate contributions from research and teaching through to community engagement, and technical and administrative support.

Dr Scott’s award recognises his efforts to engage technology-proficient students in his lectures.

“Applying digital technology in the classroom is my attempt to combat passive learning,” he says. “I try to limit my powerpoint presentations to fewer than 10 slides, and have started utilising a slightly different platform called Prezi. It requires a bit more work, but it enables me to work over a story board rather than going slide-by-slide.

“I also draw anything I can (to aid visualisation of a concept) on a digital tablet, which enables me to save the notes and upload them later should students want them. Drawing diagrams and making notes can also slow the pace of the lecture down and help to reinforce concepts.”

Dr Scott says he’s noticed that if he draws or write something down, then so do his students.

"I made an effort about three years ago to catch up after I realised how far behind the average student I was!"

“It is common for me to look up from the front of the room after constructing a diagram and see all the students drawing their own version. I’m not sure whether they learn more or not, but they are certainly engaged with the material. I’ve had lots of positive comments about the use of a tablet, and no negative ones at all.”

Alongside the tablet, he uses online quiz programs such as Kahoot in laboratories to reinforce key ideas, which he says students love. He has also begun using Padlet, an online blog site, to discuss readings, topics in the lectures, and interact with his students.

But while techonologies are now a huge part of his teaching, he says they haven’t always been.

“I made an effort about three years ago to catch up after I realised how far behind the average student I was! Students come from high school well versed in classroom digital technology – for example, most schools have a bring-your-own-device policy, and the NCEA is moving towards online exams. Yet the limit of most University teachers’ digital experience is applying Powerpoint or maybe Google Earth.”

He says his philosophy for teaching is to “give the lecture I’d like to attend.”

“As a visual learner, I like drawing diagrams that summarise concepts, and geology lends itself well to this.”

The other winners of 2017 Division of Sciences Awards of Excellence:

Each award winner was given a beautiful plaque created by the Division’s Scientific Glassblower Anne Ryan.

This year’s work of art is a glass interpretation of a T4 bacteriophage, a virus which infects and replicates within a bacterium.

The glass is then fitted to a wooden base crafted from wood in the old Chemistry building by Chemistry’s Garth Tyrell.