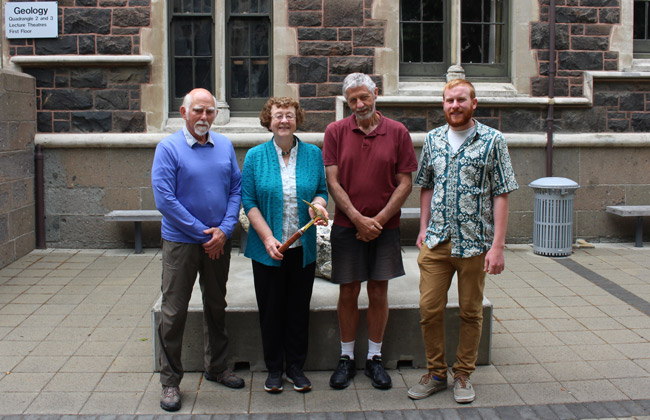 Five geoscientists from Otago’s Department of Geology received awards at the Geoscience Society of New Zealand Annual Conference held at the University of Auckland recently.

Associate Professor Daphne Lee was awarded the McKay Hammer prize for her Marsden-funded publications from 2014-2016. This prestigious award, which goes to the author of the most meritorious contribution to geology published in the previous three calendar years, was set up 60 years ago in 1957.

"It is particularly heartening that the awards are for both long- and short-term achievements ... and that the recipients range from an Emeritus Professor to one of our Master's students."

Emeritus Professor Alan Cooper is the Hochstetter Lecturer for 2018. This award commemorates the pioneering and wide-ranging contributions to New Zealand geology of Ferdinand Ritter von Hochstetter (1829-1884), and involves a tour of Geoscience branches and universities throughout the country presenting the results of major and as yet unpublished research.

Professor Dave Craw who was the 2017 Hochstetter Lecturer was awarded the S.H. Wilson Prize for Geochemistry.

PhD student Ian Geary received the Harold Wellman Prize for the most significant fossil discovery made in the previous year. Mr Geary discovered several new plant fossil sites around the Auckland coast which have yielded hundreds of extremely well preserved fossil plants. These include fruits, seeds, leaves, bracket fungi, and an amazing collection of tiny, beautifully preserved mosses of many different kinds. The sites are of Pliocene age (about three million years old) and reflect a time of much warmer climate.

Head of the Department of Geology Professor James White says these awards are “welcome recognition from our New Zealand peers of the excellent work being done in Otago’s Geology Department.”

“It is particularly heartening that the awards are for both long- and short-term achievements, across multiple different disciplines of Geology, and that the recipients range from an Emeritus Professor to one of our Master's students. Well done to all!”