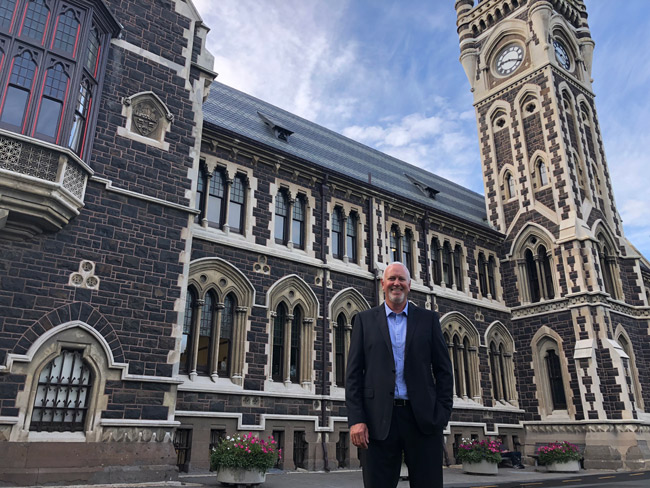 Former Deputy Proctor Andrew Ferguson is looking forward to the challenges of his new role as the University's Emergency and Business Continuity Coordinator.

Andrew Ferguson is the University’s new Emergency and Business Continuity Coordinator – after 12 years as Deputy Proctor.

The University is ramping up its focus on getting all of its campuses back to business-as-usual as quickly as possible after a disaster by creating a University-wide Business Continuity Plan – and this new role will coordinate ongoing exercises to test the divisional plans underpinning that and keep them up-to-date.

The roles of emergency management and business continuity have been combined because after dealing with an actual emergency, the University wants to recover quickly and those two activities can overlap.

"I hope to enhance the preparedness of all of our campuses to respond effectively to an emergency, to keep our staff and students safe, and to get back to business as usual as soon as possible."

To take up the new position, Mr Ferguson recently moved from the Proctor’s Office to the Office of Risk, Assurance and Compliance.

Mr Ferguson says he is very excited about the scope of his new role.

“I hope to enhance the preparedness of all of our campuses to respond effectively to an emergency, to keep our staff and students safe, and to get back to business as usual as soon as possible.”

He says he applied for the position because he was ready for a new challenge, but is gratified he has left Campus Watch as arguably the leader among New Zealand universities in terms of security systems, procedures and processes.

"That is something I am very proud of."

Director of Risk, Assurance and Compliance Mark Cartwright says Mr Ferguson’s significant experience in emergency management and background in policing made him an ideal candidate.

Mr Ferguson also has good working relationships with many University staff and local emergency services, such as police, fire and ambulance.

Business continuity plans for all the University’s campuses are being finalised now, so exercises to validate the plans will probably start about mid-year. That gives Mr Ferguson time to familiarise himself with new plans and develop scenarios for the exercises.

The University community is being asked to continue to support the work Mr Ferguson is doing because major disruptions do happen and combining emergency management and business continuity plans with exercises will help ensure the University is in the best position to respond.

Both Mr Cartwright and Mr Ferguson are happy to discuss the new role and the University’s emergency and business continuity objectives with any staff who would like to know more.