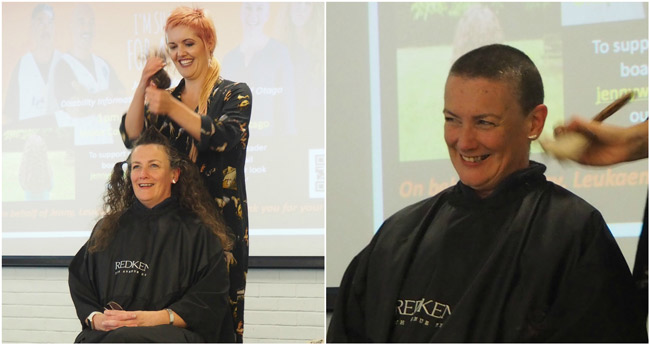 Disability Information and Support Student Advisor Jenny Weeks before and after having her head "shaved for a cure" by award-winning Dunedin stylist Kylie Hayes at a public event in the Union Common Room on Friday.

Otago’s Jenny Weeks is feeling lighter, if a little chilly, after her impressive long locks hit the deck in the Union Common Room on Friday afternoon in the name of cancer fundraising.

The Disability Information and Support Student Advisor took part in Shave for a Cure, the Leukaemia and Blood Cancer’s annual fundraising event, for several reasons.

“Firstly, my close friend Jane passed away nine years ago after a five-year battle with leukaemia,” she says. “I wanted to do this in memory of Jane and other friends and family impacted by cancer in some way.”

"I wanted to do this in memory of Jane and other friends and family impacted by cancer in some way."

The pair grew up together in Manchester, losing touch for 15 years after Mrs Weeks moved to New Zealand and re-uniting via Facebook. Mrs Weeks was in the United Kingdom visiting her mother, who also had cancer, when she heard Jane’s condition was deteriorating. When driving south to say goodbye, she received a call to say Jane had died.

“I visited her about a year before her death. At that point she was in remission but had a lady coming in every day to help her with things. It was a shock seeing her like that after all the fun and mischief we used to get up to.”

Secondly, Mrs Weeks’ husband Rob is a cancer researcher investigating the epigenetics of childhood leukaemia, with Professor Ian Morison in the Department of Pathology.

Mrs Weeks says the pair often discuss his research into the origins of childhood leukaemia and the importance of external funding to keep the research going.

“Rob is enthusiastic about identifying the cell type that gives rise to childhood leukaemia, as this will likely lead to better, more targeted therapies.”

As well as supporting fundamental research into blood cancers, Mrs Weeks is keen to stress the important work that the Leukaemia and Blood Cancer New Zealand provides in raising awareness and in supporting blood cancer patients and their families.

Friday afternoon’s event was introduced by Mrs Weeks’ longstanding friend, Professor Sarah Young. The Special Guest Speaker for the event was Health Minister and Dunedin North MP Hon. David Clark – a coup for Mrs. Weeks, who says she was “a bit cheeky and just asked”.

"Rob is enthusiastic about identifying the cell type that gives rise to childhood leukaemia, as this will likely lead to better, more targeted therapies."

Her shave was also attended by Leukaemia and Blood Cancer New Zealand Business Manager, Annabel Lush, who used the event as a platform to announce that her organisation will be opening a support centre in London Street.

Award-winning Dunedin stylist Kylie Hayes completed the shave – maximising the theatre of the event by auctioning off a voucher for one of her fabulous haircuts. The winning bid was from Steve Downey, which was then matched by Paul MacGourlie and The Minister, who both had their heads shaved on the day!

“Paul got a little carried away and went the extra mile and had his beard and both eyebrows removed,” Mrs Weeks says.

Freedom Hair, a Dunedin-based company that produces hair pieces for people who experience hair loss mainly as a result of alopecia has purchased the hair.

After the shave, Mrs Weeks told the Otago Bulletin Board that she felt liberated and everyone had told her how great she looked and how it really suited her.

Mrs Weeks also said that she was really grateful for everyone who donated and made the event very special and that over 100 people watched the event on Facebook Live, including family back in the UK.