Getting to know Otago’s new Chancellor

A new Chancellor took the helm of the University of Otago Council at the beginning of this year. Dr Royden Somerville QC, a Dunedin-based barrister, stepped into the role on 1 January. He brings a great deal of experience to the role – having been a member of the Council from 2010, and Pro Chancellor from 2017. Dr Somerville is the University’s 19th Chancellor, but as he mentions in this opinion piece written for the Otago Bulletin Board, he is directly descended from the first. 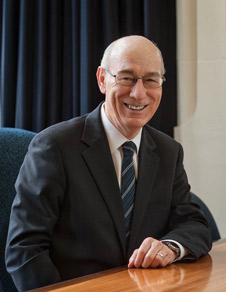 Next year’s celebrations will provide a significant opportunity not only to celebrate the rich heritage of the University, but also to promote its work and celebrate its success. It is the first university in New Zealand to celebrate its 150th. I hope that the University’s community world-wide will be encouraged to attend one or more of the many functions being held.

Before I came to Otago, the Rector of my high school, Waitaki Boys’ High School, advised me to try studying law because of my interest in debating. When I commenced law the Dean of the Law Faculty was Professor Frank Guest. Sadly he died in my second year. The next Dean was Professor Peter Sim who was an excellent teacher and very supportive of me during my studies. I had an absolutely marvellous time as a Law student. I played social rugby for the Law Faculty and served on the executive of the then Otago University Law Faculty Students’ Association. I also mooted for the University.

"... the University also needs to ensure that it has leading-edge facilities so that members of the academic and general staff and students can do their best work."

I worked part-time and tutored in Law while studying for my Master’s degree. Over the years I have maintained my links with the Faculty. I lectured for a few years in environmental law and later completed my PhD in Law. Interestingly, two of my fellow Law students are now Chancellors of universities in the United Kingdom. They are Sir Malcolm Grant at York University and Dame Judith Mayhew Lomas at Bishop Grossesteste University.

I also debated for the University. I was president of the Otago University Debating Society and president of the New Zealand Universities’ Debating Council. When I qualified for the Joynt Scroll team, the judge of the elimination debate was the Rev Lloyd Geering, now Sir Lloyd Geering, who has just celebrated his 100th birthday. He had an Honorary Doctorate of Divinity conferred on him by the University of Otago in 1976.

At University I met my wife, Lee, who had also commenced studying at Otago in 1966. She lived at St Margaret’s College for two years. She graduated with an MA in English and a DipGrad in Education. She also gained a Diploma in Teaching (equivalent to what is now a graduate diploma in teaching) and has qualifications in copy-editing. Our three children studied at the University of Otago.

I have been asked to refer to some matters that I believe are important in respect of the University. Due to the word limit for this piece I will only mention a few.

In my view, the University of Otago stands out as a leader in education, research and community outreach. We need to celebrate that. However, the University also needs to ensure that it has leading-edge facilities so that members of the academic and general staff and students can do their best work.

"I find the role of Chancellor very interesting and stimulating and am thoroughly enjoying working with the Vice-Chancellor, the University Council, and members of the University community."

Of course, the University must act independently at all times. It is central to its role to advance knowledge and human welfare. Students must be assisted to develop the ability to adjust to an ever-changing world. When I spoke at the Convocation during Orientation Week, which was my first formal occasion as Chancellor, I remarked that:

“It is, of course, a principal role of the university to help equip clever young students to develop the intellectual capacity to address the significant and complex challenges confronting our shared humanity and to benefit from the emancipatory power of a world-class university education.”

The University of Otago is noted for its superb residential campus. Having resided in a residential college I am aware of the advantages of that. I was delighted when Dunedin students were able to live in residential colleges if they chose to. This opportunity was not open to our children and we were always sorry about that. I am also very pleased that the Locals Programme is so successful.

I always relish the enthusiasm and optimism of our students. At the Convocation in February I observed that:

“From personal experience I can confidently predict that your time here will have a profound effect on your intellectual and social development as you experience the stimulation of being part of a community of independent thinkers and scholars.

You will make life-long friendships and benefit from the cultural influences of students from over one hundred different countries.

Your lecturers will inspire you and support you as you undertake your studies. They are world-class researchers, scholars and teachers.”

I find the role of Chancellor very interesting and stimulating and am thoroughly enjoying working with the Vice-Chancellor, the University Council, and members of the University community.