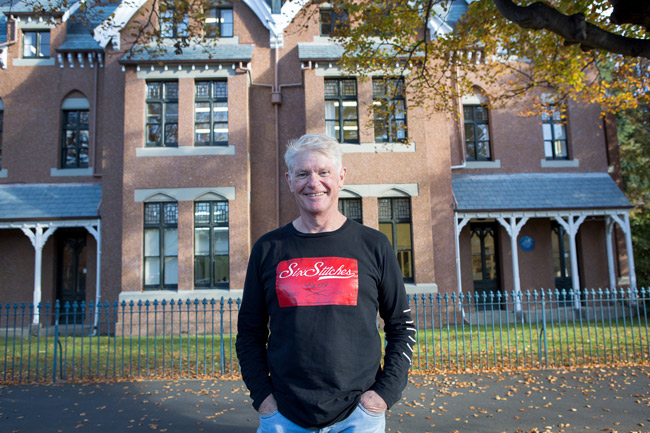 Otago Graphic Designer Peter Scott will today pack up his desk and head into retirement, 45 years, one month and one day since he first began working for the University.

On 26 March 1973, as a fresh-faced graduate of Otago Polytechnic’s Fine Arts degree, he took up his first role at the University – as a Medical Illustrator at the Medical School. No CV, no interview; he was recommended by a friend.

His tasks within this first role highlight the technological advances that have been made since the early 1970s.

“People would bring us their graphs on graph paper to draw up with pen and ink,” he says. “It was really labour intensive.”

And another task which is hard now to imagine: drawing an operation.

“It was the best part of the job,” Peter says. “Otago had some really leading-edge surgeons, who were trying new ways of approaching operations, and these operations needed to be published.

"I fainted at my first operation. It was a surgery at Wakari Hospital, the removal of indatid cyst from a liver. In the first five minutes I just went crash."

“We would go along, taking a pad and pencil, and each time the surgeon got to an important point in the operation – like an incision, or a join – they would stop. A photographer would take photos for scale and we would draw exactly what the surgeon was doing.”

The illustrations were included in submissions to medical journals and books.

But although it became Peter’s favourite aspect of the job, initially it wasn’t so easy.

“I fainted at my first operation,” he admits. “It was a surgery at Wakari Hospital, the removal of indatid cyst from a liver. In the first five minutes I just went crash. When I came to, there were all these people around me. But my first thought was ‘what about the person on the table?’”

Luckily, this was his one and only fainting episode.

“Once I got into the rhythm of why I was there I was OK.”

His medical illustrating role lasted until the early 1990s and over the years changed as technology advanced.

“We worked with a lot of orthopaedic surgeons, and computers were great for drawing spines.

“It also changed the way we would lay out a book. Previously we would use a typesetter and lay out each page. Suddenly there was a system for putting a book together easily. It was a whole new world.”

"Those formative years in the Medical School were incredible. It was such a big place, and so powerful. The people were amazing."

In the early 1990s, the Medical Illustration department became a full cost recovery unit – meaning departments had to pay for a previously free service. Departments could not afford it – and within three years it closed down.

But Peter looks back on those years with pride.

“Those formative years in the Medical School were incredible. It was such a big place, and so powerful. The people were amazing. Many of them were world leaders in their respective areas and we became friends. They treated me like a colleague.”

The end of his medical illustrating role saw Peter take a series of stepping stones through the University, first to the University’s then Education Technical Support Service (ETSS), then to a stand-alone publication role, and finally to Marketing and Communications in 2000.

During this time he transitioned from an illustrator to a graphic designer.

In this role in Marketing and Communications, among a multitude of other work, he has completed the design for 46 Otago Magazines.

Peter says a particular highlight of his time in Marketing and Communications was being part of the team which won a national award for the ““Get over it!” campaign in 2003.

“Going to the awards as a group was really empowering,” he says. “When you get to celebrate excellence as a group, it’s great for everyone.”

While he admits he has received a ribbing from friends for staying in one workplace for 45 years, he says he wouldn’t have remained if he didn’t want to.

"The technology coming through is staggering ... Already the first AI is moving into design. It makes me wonder whether graphic designers like me will be necessary in the future."

But right now, he feels he is making a timely exit.

“The technology coming through is staggering – just how quickly it has moved, and it will continue to move quickly,” he says. “Already the first AI is moving into design. It makes me wonder whether graphic designers like me will be necessary in the future.”

He also worries about the way technology is eroding the way staff communicate with one another – and says if he was to offer one piece of advice it would be to get out from behind computers and email accounts and actually speak to each other.

For Peter, the greatest highlight of his career has been the people he has worked with.

“It all comes back to the people,” he says. “They’ve been the interest that’s kept me sparked. Their work becomes my work.”

While he opted to have no formal farewell, Peter has been “free ranging” this week – and saying goodbye to those he has worked with across the University.

As an indication of the high regard he is held in, when Otago Design and Brand Manager Luke Calder sent out an email earlier this month letting staff know Peter would be finishing today, Peter was immediately bombarded with kind messages of farewell.

Those who have worked most closely with him say his departure will leave a great gap in the University.

“You can’t help but admire Peter, both as a person and a colleague. His commitment and passion towards his work and the University as a whole is unrivalled, even after 45 years’ service, and the University has benefited greatly from Peter’s presence.

"You can’t help but admire Peter, both as a person and a colleague. His commitment and passion towards his work and the University as a whole is unrivalled ..."

Peter is truly one of those rare people who are irreplaceable and coming to work just won’t be the same without him.

"Peter Scott’s attention to detail, his eye for design, his commitment to exceptionally high standards and the production of a huge body of work over many years, has enhanced the University’s reputation."

And Editorial Manager Karen Hogg, who has worked closely with Peter on countless publications says Peter has made an enormous contribution to the University over the past 45 years.

"His institutional knowledge is unrivalled and his design skills unsurpassed.

"Wherever you look on our campuses, you will see his work. He has designed all 46 issues of the University’s magazine, as well as countless books, reports, prospectuses, brochures, posters and more. He has always taken the time to understand his clients’ needs while still meeting even the tightest deadlines. His commitment has helped lessen the load for a lot of us and made us look so good!

“It has been a great pleasure to work with Peter. He will be missed.”

He says he will miss the University – and of course – the people.

“As my friends in Office of Māori Development always told me –