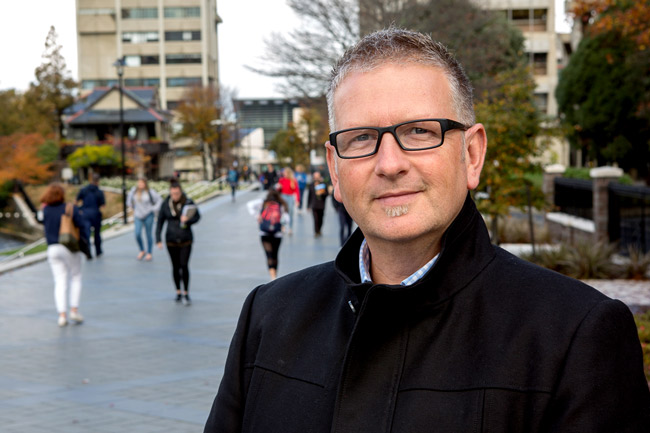 Otago’s new Deputy Proctor was greeted with a Highlanders flag on the wall of his office on his first day this week, a situation he quickly remedied by hanging a Crusaders flag beside it.

Geoff Burns comes to the important Otago role on the back of 27 years as a police officer in Christchurch, and says if nothing else, the Crusaders flag is “a conversation starter and a great way of breaking the ice when meeting the new guy!”.

His police career saw him first stationed at Papanui in Christchurch’s northern suburbs, working frontline duties. He then moved onto various investigative squads. In 2005 he became a police forensic photographer, working primarily with CIB staff providing a full range of forensic imaging services across all crime scene types. And for the past six years, he has been manager of the Police’s South Island forensic photographers.

"I have had a fantastic Police career, however the time was right for both me and my family to spread our wings and seize a new challenge ..."

He says side-stepping into the role of Deputy Proctor at Otago is an exciting career move.

“I have had a fantastic Police career, however the time was right for both me and my family to spread our wings and seize a new challenge, and I see the Deputy Proctor’s role as being both challenging and rewarding. The diversity of the role appealed to me, communicating with and assisting the many groups that make up the Universities wider community.”

He and his family moved from Christchurch last Thursday, having bought a house in Maori Hill – and Mr Burns began work on Monday.

“Our son has started at George Street Normal School and is settling in well, but missing his mates from Canterbury, although he’s very quickly become a Highlanders supporter!”

He says the shift will add to the usual challenges of taking on a new role, but is positive and enthusiastic.

“I’m a firm believer that most challenges can be worked through by talking, asking questions with a smile and not being scared to say ‘I’m new – I don’t know’.”

Mr Burns replaces Andrew Ferguson as Deputy Proctor. Mr Ferguson was in the position for 12 years before becoming the University’s new Emergency and Business Continuity Coordinator in February.