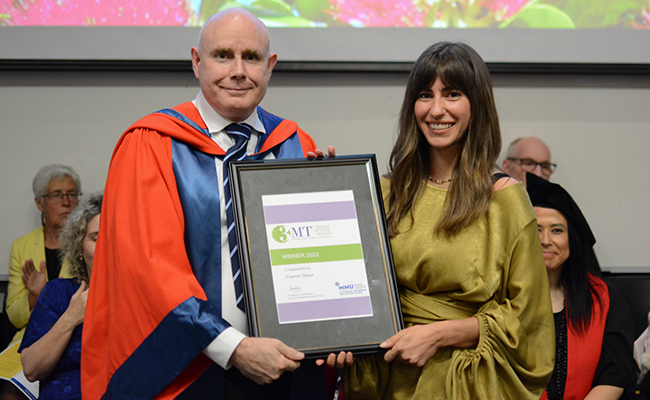 Her presentation, The Nature of the Beast, focused on her research into a new blood cancer treatment, CAR T-cell therapy. The novel treatment uses the body’s own immune cells to eradicate cancer, by reprogramming them to recognise and then kill cancerous cells, similar to the way in which they usually kill pathogens.

She was surprised and honoured to have won the competition.

“It feels very exciting and unexpected. There were so many talented entrants, so I feel honoured to have won.”

Nouri is in the last year of her PhD and is supervised by Dr Michelle Thunders in the Department of Pathology and Molecular Medicine. Her win comes with £750 in prize money and a certificate, which was presented at the Hui Whakanui Tauira student awards celebration in Wellington on Friday.

The Matariki Network says the judging panel was very impressed by the excellent quality of all the entries, and had found it very tough to pick the winner.

First developed by the University of Queensland in 2008, the Three Minute Thesis competition challenges research students to communicate the significance of their projects to a general audience in just three minutes.

Acting Deputy Pro-Vice-Chancellor, Health Sciences, Professor Neil Gemmell, presented Nouri with her certificate and congratulated her on her win.

“It’s a significant achievement to have won against such top-quality entrants from around the world.

“It’s a real challenge to be able to communicate a complex area of research to a general audience and make it come alive for them.”

Nouri won best doctoral presentation at the University of Otago’s Grand Final, after winning the Wellington heat of the 3MT competition in June. Her Wellington win came with $500 in prize money donated by event sponsor Research for Life.