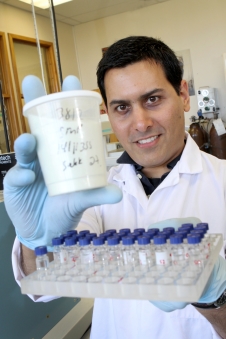 The amount of national and international publicity PhD candidate Emad Ehtesham Rad has received for his work is a welcome repayment for all the help Otago has given him, he says.

Mr Rad, originally from Iran, won a scholarship to do his PhD in food provenance, while his work on identifying the isotopes in rainfall – thus allowing the original source of milk powder to be identified – has attracted much media attention.

“I’m very glad, because it feels like the good publicity for the University goes some way to pay them back for all they have given me.”

Articles on his work have appeared across New Zealand and overseas, including Russia.

Mr Rad studied in Iran before completing a master’s degree in Sweden in food technology.

His research with Otago’s Department of Chemistry has been timely as there has been a recent increase in the number of imitation New Zealand dairy products, particularly milk powder, available in China.

He has confirmed that the powder’s geographical information can been identified by New Zealand’s “distinctive natural isotope signature” that passes from rainfall, into the pasture, and into dairy products.

It opens new avenues to explore to protect New Zealand’s reputation, such as being able to identify the milk powder being used in infant formula, which is frequently, sometimes dangerously, faked as being from New Zealand.

Mr Rad would also like to use the method to help in Iran, where precious supplies of saffron are often passed off as the more superior Iranian product.

In fact, the possibilities of using rainfall data maps for food provenance could be used in areas such as fish identification in Europe, or in biosecurity matters.

Hoping to graduate in May this year, Mr Rad is seeking postdoctoral work in the same area of research to further his knowledge.