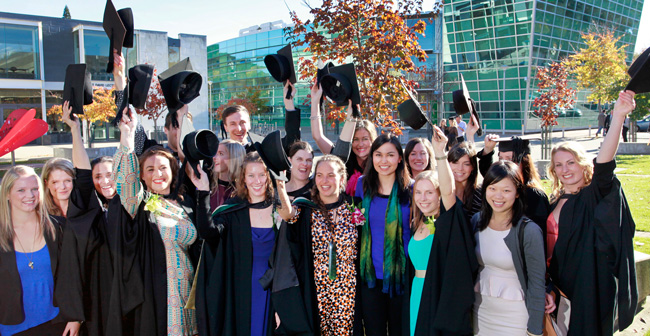 New Zealand’s first Master of Dietetics graduates crossed the stage in Dunedin on Saturday as part of the University's first graduation ceremony of the year.

The 12 graduands (and seven more in absentia) are the first in the country to graduate with the two-year Master’s degree.

Programme Manager Dr Julie Weaver told the Bulletin Board the students who have just graduated are a transition group, who entered the PGDipDiet, and were distance taught and based in clinical training centres across the country, and then opted to upgrade to the MDiet and complete a significant research project.

The new programme is now taught in Dunedin and its first year involves a mixture of taught work as well as supervised practical experiences in a variety of settings including hospitals, the community, the University’s student dietitian clinic, as well as within food service environments (such as rest-home and childcare facilities), and within public health environments.

In the second year students are given a professional placement in settings all over New Zealand for 13 weeks, and undertake a research project.

A special morning tea was held to celebrate the achievement of the first students, which was attended by Nadia Lim, a former dietetics student and a previous winner of New Zealand Master Chef.

Human Nutrition has been taught at Otago for nearly 100 years and the department here is the largest in Australasia and one of the best known in the Southern Hemisphere. Otago was the first to form a university-based Dietetic Dietetics programme, and has been responsible for training dietitians since 1993. Otago’s Dietetic Dietetics and Human Nutrition graduates are found in leading roles in New Zealand and Australia as well as in interesting positions throughout the world.