If the results of the Three-Minute Thesis competition on Friday are anything to go by, PhD candidate Daniel Wee has a good chance at solving a decades-old argument. 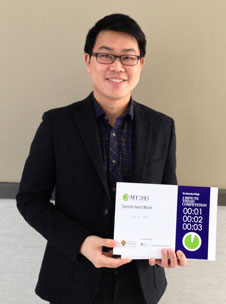 Daniel won the annual competition, which is the finale of Graduate Research Month, with his presentation on the main question of his Philosophy thesis: Is it conceptually possible for a lifelong solitary individual to follow rules and have a language?

Originally from Brunei, Daniel has studied around the world (undergraduate in Warwick, England, and Masters from Chicago, United States), following his passion for the philosophy of language.

Now in his first year of his doctorate, he is trying to find a conclusion to a philosophical debate that has been underway since the 1950’s.

“I’m trying to explore and resolve a debate in the philosophy of language – whether or not it even makes sense to say that someone who develops in solitary could create something that would count as a language in the common sense.”

“So, if that person came up with a sound for “tree”, would that be a valid language if no-one else exists who confirms it by using the same sound.”

By parsing and critiquing the debate over the years, Daniel hopes to come to a logical resolution.

However, he admits that his own opinion on the debate has changed in the past year - pointing to an interesting couple of years ahead.

Helen Alderson, of Anthropology and Archaeology, was placed second on Friday; and David Barton, from Psychology, won the vote of high school students present at the event.

Daniel will now represent Otago at the Trans-Tasman Three-Minute Thesis competition at the University of Western Sydney in October.