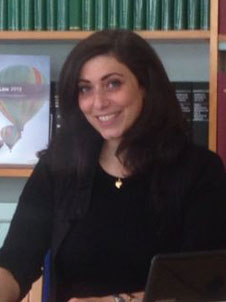 Three months in Cambridge on a Fellowship was nowhere near long enough for Maria Pozza to achieve all she wished to, but she still managed to squeeze in some amazing accomplishments.

The PhD candidate was invited to speak at a prestigious seminar and was quoted in the Guardian newspaper, as well as making progress on her research.

While there she looked particularly at the differences between hard law (treaties or legal settlements) and soft law (codes of conduct) as they applied in outer space, and continued her work on her own proposal for arms control law off-planet.

She spoke at a Space Security Seminar at the London Institute of Space Policy and Law and her talk was written up in the Space Policy journal and in the Guardian.

“It was really amazing. I met some really important people in the area of security of outer space and it was such an honour to be included.”
Maria is putting the final touches to her thesis and then plans to turn it into a book – something she says she was able to “lay the groundwork for” while in Cambridge.

She also hopes to find an academic position and continue her research.