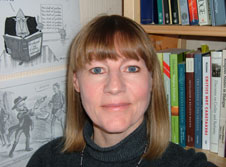 New Zealand schools are resistant to following the lead of many western countries in including education about religions and beliefs in the curriculum, Otago PhD student Helen Bradstock has found.

“Religions are a compulsory subject in UK schools,” Mrs Bradstock says. “There were curriculum changes there during the 1970s when there was an increase in immigration and ethnic diversity, resulting in less ‘confessional’ Christian-based religious education being taught. Since 1988, Local Authority Agreed Syllabuses must include different religions and beliefs and be delivered in a ‘non-confessional’ way, i.e. not expecting students to accept the religions as their own.”

Mrs Bradstock embarked on her PhD topic, Is there a place for Religious Education in the mainstream Primary School Curriculum of Aotearoa New Zealand? in 2011 through Otago’s Department of Theology and Religion. She set out to find whether schools in more ethnically diverse parts of New Zealand were introducing aspects of religions into the curriculum.

“I made a comparison between three schools in Auckland, which is increasingly diverse, and three in Southland, which is much less diverse, plus a pilot study at a school in Dunedin.

“In all areas, the teachers and parents I interviewed were very resistant to teaching religion within the curriculum, [even if it involved] discussing the ways different religious beliefs affect customs and behaviour; why people wear the clothes they do and eat the food they do. It seems to be hard to talk about religions in schools.”

When she analysed the manner in which her interviewees were talking about religious education in schools, Mrs Bradstock found two dominant discourses which, between them, effectively disqualified religions from the New Zealand curriculum.

“The first is the conservative Christian view that New Zealand is a Christian country and religious instruction in schools should consist of teaching about Jesus, the Bible and Christian values; children should be enculturated into Christianity. Within this discourse Bible in Schools, taught by church volunteers within the school day but ‘outside of the curriculum’, is normalised.

“Then there is a polar opposite, strong secular rationalist discourse that there should be no religion in the secular curriculum; that religion has nothing to do with education. This discourse appears to limit the knowledge New Zealand children may obtain about religions and beliefs at school. Schools in the study did not feel they had the responsibility to teach about diverse religious beliefs and some interviewees thought it would be illegal to do so in a state school.

“Volunteer-led Christian instruction has been running almost since the 1877 Education Act established that teaching in state schools would be secular. It was made legal in 1962. About 40 per cent of primary schools currently run Bible in Schools classes which are mostly co-ordinated through the Churches Education Commission.”

Mrs Bradstock hopes that when her PhD is complete, it will start a conversation that hasn’t happened in the New Zealand education system for many years, mirroring the trend among similar countries.

“Since the events of 9/11 there has been an enormous move in Western countries toward education about religion from the earliest stages of primary school, to increase familiarity and understanding of other beliefs. Even in countries such as France and the US they are now teaching facts about a range of religious beliefs.

“Australia has the same system of volunteer-led instruction but – unlike New Zealand – other religious groups such as Muslims and Buddhists also run religious instruction in schools. However, a current review of the federal curriculum is considering ways to include teaching about religions in a cross-curricular way.”