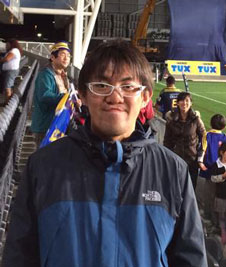 Who owns a sports team, the financiers or the fans?

“Marketing studies have largely been based on one idea – sports fans belong to the team… they are its customers. I propose that fans see their teams as valued possessions as, actually, they say, “It’s my team!” Effectively a sports team becomes culturally shared with fans, and fan-identity is shaped within relationships to a team.”

Mr Sumida is focussing his studies on fans of the Japanese football team Sagan Tosu, a professional soccer team from Tosu city. (During his data collection Sagan Tosu was a second division team, but has since risen to the first division).

He categorised Sagan Tosu fans into two groups, individual supporters and members of organised groups, and interviewed some from each. He found both groups felt a deep sense of ownership towards their team. This feeling broadened as they amassed fan experiences shared with family and friends.

“One respondent said he is a father now, his son is six or seven. Suddenly his son says ‘Hey dad, let’s sing a song about this team’. Singing together with his son he felt like football can reinforce family bonds.”

Mr Sumida’s supervisor, Marketing’s Dr Ben Wooliscroft, points out, “The fan culture Ken studied in Japan is intense. They are hyper fans. There is a sort of dedication not seen in Dunedin. When Sagan Tosu went down a division, support stayed strong, but the fans felt in part responsible. They invented new songs to sing during the games and danced harder, they felt their actions affected the game and their team.”

In terms of regarding fans as consumers, Mr Sumida says his theory introduces an anthropological perspective to sport marketing, offering an opportunity for new approaches to branding. Dr Wooliscroft, agrees, saying Mr Sumida’s work turns the normal approach of sports marketing on its head.

“If you look at sports marketing books, fans are almost on the balance sheet, treated as if they belong to the team as of right. Teams change their colours without consultation, shift cities without consultation. [Ken’s work suggests] sports managers need to re-think and see themselves as being in the service of the fans.

“Sports marketing has lagged behind mainstream marketing in a lot of instances. Take the American franchise model that has come to New Zealand rugby and the emergence of professional sport. It changes the relationship with the fans when you expect them to move from supporting a team to supporting a corporation. Now teams hold games when it suits TV, not when it suits fans. Even home-game fans have to bow to the will of TV – standing in cold, night-time stands…”