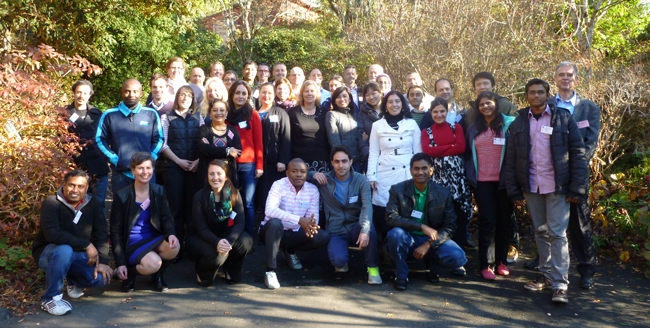 About 30 postgraduates attended the Translation and Commercialisation course held at Glenfalloch last week.

A “boot-camp” to train and inspire PhD students to translate their research into something that benefits the community was held for the first time last week.

The Translation and Commercialisation Course was run by the Division of Health Sciences, the Research and Enterprise Office and Otago Innovation Ltd (OIL). Held at Glenfalloch, it provided about 30 students with the opportunity to learn more about using their research to change the world.


"...the traditional idea of publish or perish should be replaced with three p’s: protect, publish and prosper."

Professor Ian Tucker, Associate Dean (Research Commercialisation), from the Division, says the idea for the two-day course aligns with signals from government that universities should be more engaged and entrepreneurial with their research. It also builds capacity in the University to advance its mission of applying our research to benefit society.

“As a good deal of research is done by PhD students, we wanted to give them the skills to think about how they can translate their research findings to something tangible.”

The idea of not just publishing research but translating it into public or commercial goods is questioned in some quarters, Professor Tucker acknowledges. But this will change he believes.

“However, the traditional idea of publish or perish should be replaced with three p’s: protect, publish and prosper.”

He adds: “It’s not just about prospering personally, but for the University to prosper and for society.”

Rather pleasingly, last week’s event was attended by students from all Divisions of the University emphasising that translation and commercialisation if not just for the sciences.

“We’re hoping students will go back to their departments enthusiastic about these ideas and have a positive impact on other students. We also hope that whether today, or in the future, these students will be encouraged to translate their research – via a start-up company, a licence deal or a government-funded social programme – into something that will benefit the public.”