From designer to dietitian 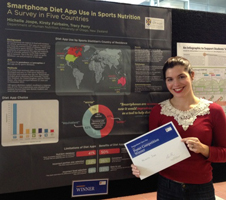 Michelle Jospe recently won a Postgraduate Poster Competition with a crisp presentation about the use of smartphone diet apps in sports nutrition.

Michelle Jospe gained some media attention in August as a co-organiser of Otago’s first Postgrad and Early Career Nutrition Conference and the SWIFT diet/exercise trial study she is helping to run for her PhD studies.

Michelle’s deep involvement in nutrition research stems from a right angle career change made in the most exotic of circumstances.

Originally from Montreal, Canada, Michelle had a career as a graphic designer that, after summers of rock climbing in Squamish, British Columbia, took her to Austin, Texas. There she worked on a project using design to help people navigate MD Anderson Cancer Centre – one of the biggest hospitals in the world. The job introduced her to the fascinations of healthcare and research, but it is more mundane aspects left her restless and questioning her career path. Michelle’s solution? A year off rock climbing throughout Asia and North America.

Michelle says, “In China, during my first week in Asia, I met my now husband, Paul, who’s from New Zealand. We’ve been together ever since. In India, lying in a hammock, I thought, ‘if I could do anything, I would want to work in nutrition’. I’d always been passionate about food, health, and working with people.

“Paul was also keen to retrain (from accountant to physiotherapist), so we investigated universities in Canada, Australia, and New Zealand. Otago was the best fit for both of us. It offered excellent programmes in nutrition and physiotherapy, and it was in a beautiful location with great access to outdoor sports.”

"In India, lying in a hammock, I thought, ‘if I could do anything, I would want to work in nutrition’. I’d always been passionate about food, health, and working with people."

A PhD was never on Michelle’s radar. She wanted to work as a dietitian, which meant continuing past her BSc in Nutrition to a Postgraduate Diploma in Dietetics. Presented with the option of writing a thesis and converting the Diploma to a master’s, she discovered she loved research.

After finishing her master’s, Michelle gained a part-time job as a dietitian at a GP clinic, but she wanted keep on with her research to understand and generate evidence for best practice in nutrition.

“As a working dietitian, I see that many of my patients struggle to stick to their diets, whatever those diets might be. I am interested in finding out which of our support strategies, which can all be implemented in a general practice, can best help patients who are faced with the difficult task of losing weight.”

When asked if her graphic design experience has assisted her research work, Michelle says it helps her communicate her research findings to the public. Of that there can be no doubt, since she just won first prize in the Postgraduate Poster Competition with a crisp presentation about the use of smartphone diet apps in sports nutrition.