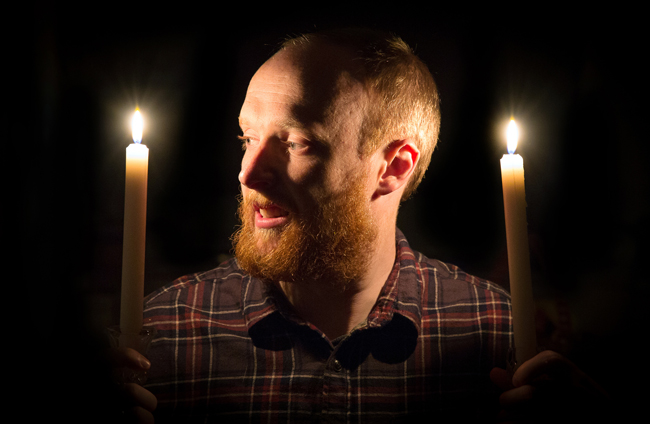 Neil Vallelly doesn’t have to imagine the effect of candlelight on 16th Century theatregoers.

The Northern Irishman and Otago PhD candidate is co-supervised by Dr Farah Karim-Cooper at Shakespeare’s Globe Theatre in London, where a replica indoor theatre from the period opened in 2014.

He has recently returned from seven months based at the Globe, where he could witness the reality of lighting an indoor theatre by candles alone, albeit on a modern audience used to electric light.

The English Department candidate came to Otago after being granted a Commonwealth Scholarship in 2011. The desire to work with his other supervisor, Professor Lyn Tribble, and the attractions of New Zealand, led him to choose the other side of the world from Queen’s University Belfast where he had completed his undergraduate and Master’s degrees.

It was the need to maintain candles, which flickered after a period of time depending on the quality of the tallow, which resulted in plays being put on in acts.

As it turned out, Professor Tribble knew Dr Karim-Cooper and suggested the co-supervision – “It was a real surprise and a fantastic opportunity,” Neil says.

It was while researching renaissance drama for his Master’s that Neil became interested in the idea of light: “Not light as a material substance, but the experience of light.”

In the 16th Century people were affected by light, or the lack of it, daily, with candlelight of varying quality their only non-natural light source. Neil’s work looks at the impact flame-based light had on theatre.

For example, it was the need to maintain candles, which flickered after a period of time depending on the quality of the tallow, which resulted in plays being put on in acts. The breaks were required to mend the candles that were suspended in chandeliers over the stage, or in wall sconces.

Most theatres in the time period were outdoor theatres such as the Globe, but the ability to light theatre indoors meant plays could be put on in the winter.

There are not a lot of existing references for Neil’s study, as candles were so commonplace for the time there was not a lot written about their use. He is able to surmise much from documents such as contracts for the purchase of candles, for example, and there are some references to candles in social documents.

Whether directors of the time experimented with the use of light, in the way that today’s theatres do, is still open to scholarly debate.

Neil hopes to finish his PhD this year and begin an academic career.