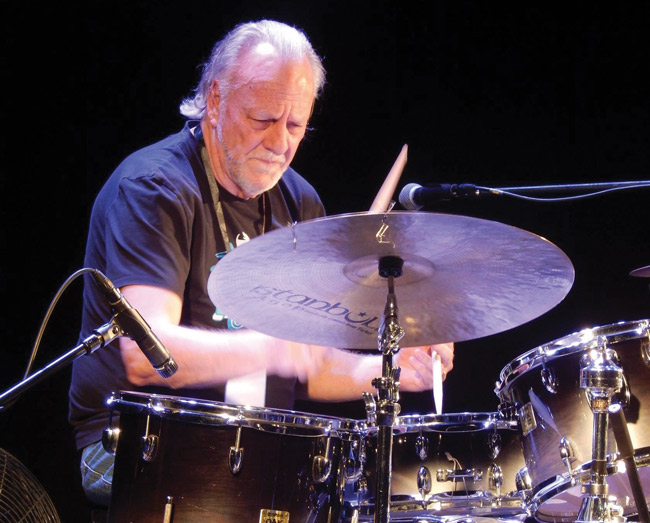 One of the most renowned jazz drummers in the world gave his final recital at Marama Hall last month, as part of his University of Otago Doctor of Musical Arts (DMA) degree.

Frank Gibson has had a vast career that has taken him around the world, and has seen him play with some of the most well-known names in jazz from Frank Foster and John Scofield to Alan Broadbent, Joe Henderson and Sam Rivers, as well with a variety of artists from other musical genres including Shona Laing, Dusty Springfield and Diana Krall.

He has played on over 200 CDs/albums, won Jazz record of the year three times, played on 10 other award winning albums, and in 1983 was inducted into the Zildjian hall of fame.

His friendship with Department of Music’s Ian Chapman led him to Otago.

"It has provided the opportunity to collaborate and despite my vast experience over many decades to create something entirely new."

“I’ve known Ian for many years and have recorded with him at the University’s Albany Street Studios. Having worked at three other universities I was impressed with Otago and undertook my master’s here. I was supported exceedingly well by all in the Department of Music, Theatre and Performing Arts and was particularly pleased with the supervision, hence decided to complete my DMA.”

Supervised by Associate Professor Rob Burns and Professor Henry Johnson, Mr Gibson has focussed on ‘performance as research’ with a project entitled Linking Improvisation to Cultural Context: Bringing a Jazz Drumming Improvisational Aesthetic to the Music of Diverse Cultures.

For this, he has explored improvisation across different musical spheres, including jazz, Chinese music, Indian music and western classical music.

“It has provided the opportunity to collaborate and despite my vast experience over many decades to create something entirely new.”

Mr Gibson is based in Auckland and still spends time in the United States. However, he says that technologies have meant it has been no problem for him to complete his Otago DMA.

“I'm grateful to my supervisors Rob Burns and Henry Johnson for their guidance, expertise, knowledge, patience and understanding. They have been outstanding.”

Otago’s DMA programme has been running for eight years and attracts students with various backgrounds and at different levels in their careers.

Mr Gibson will submit his exegesis towards the degree later in the year.