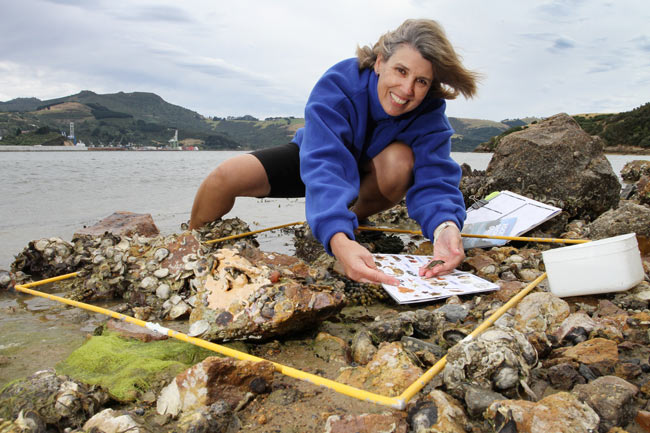 Otago’s New Zealand Marine Studies Centre is launching ‘Marine Metre Squared’ - a nationwide project to bring scientists and the community together in monitoring the animals and plants found on the nation’s rocky shores.

Marine Metre Squared is a ‘citizen science’ project that encourages the public to pick a patch of the rocky shore and, with the help of information found on the project website, www.mm2.net.nz, regularly identify and count the marine life found there.

"The data collected and uploaded will provide scientists with meaningful, valid environmental baseline data across the whole of New Zealand so they can assess the variety, distribution and abundance of shore animals."

“We’re encouraging people to get out on the beach with our guide and meet their seashore ‘neighbours’. To do the Marine Metre Squared survey all they have to do is measure out a 1m x 1m square patch at low tide, identify and count animals in the area, fill out the survey forms available on the website and then upload the data.

“Using the website, participants will be able to store, map and graph their own data for comparison between seasons, regions and species, and compare what is in their patch with other people’s.”

Ms Carson says the project includes providing resources for schools to take part. The aims of the project are aligned with several of the Principles and Values of the New Zealand Curriculum as well as the compulsory Nature of Science strand of the Science Learning Area. A specially designed NCEA level two project has been prepared, too.

“The data collected and uploaded will provide scientists with meaningful, valid environmental baseline data across the whole of New Zealand so they can assess the variety, distribution and abundance of shore animals. It will enable us to not only take a snapshot of rocky shore biodiversity, but to establish a baseline against which future change can be measured.”

The Marine Metre Squared project has attracted funding assistance of $50,000 per year for three years from the Ministry for the Environment’s Community Environment Fund.

Ms Carson says similar projects take place in other countries, but in a localised manner. This is the first time a project such as this has been released on a nation-wide scale.