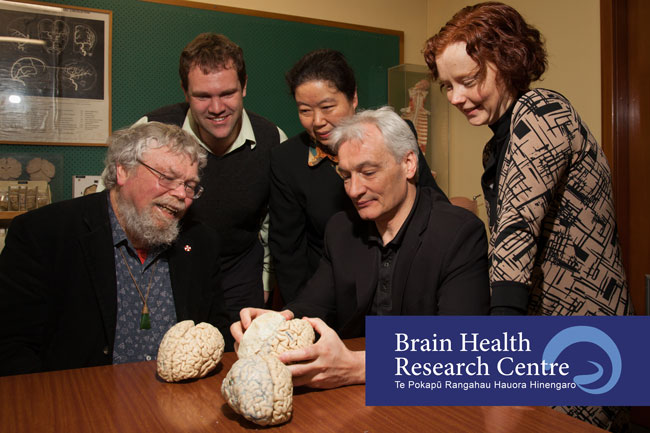 Late last year the University formally recognised 14 research centres. Designation as a Research Centre signals the excellence and coherence of the research group's endeavours. In the first of our Research Centre Series, the Bulletin finds out about the Brain Health Research Centre.

Scientists at the Brain Health Research Centre at the University of Otago are undertaking cutting-edge international research into the workings of the brain, brain disease, and developing new treatments for neurological disorders.

An ageing population means more people will be affected by neurological disease such as Alzheimer’s, Parkinson’s, Huntington’s and stroke. Fortunately, every day brings new findings that enhance our understanding of brain health and disease, and offers hope to individuals, families and society.

The BHRC has 220 multidisciplinary researchers and clinicians across 41 laboratories, who are committed to finding new treatments to harness the brain’s restorative potential, and testing innovative new therapies.

The Centre’s theme for 2013 is Alzheimer’s disease. In 2011, the total financial cost of dementia in New Zealand was estimated at over NZ$950 million, with numbers of cases set to triple by 2050. Funded by the Health Research Council, a large team of researchers at the BHRC are focusing on identifying biomarker genes or proteins in the brain that are diagnostic of Alzheimer's disease. This study could lead to the development of a cheap and effective population screening, which would enable successful treatment of early onset symptoms at a prodromal stage. As well as this, our researchers are also working on finding an effective treatment for the disease, by harnessing the power of protective molecules already found in the brain.

Translating neuroscience discoveries into real treatments for those suffering from neurological disorders is a top priority for the Brain Health Research Centre.

To learn more about the different areas of research at the BHRC, visit www.otago.ac.nz/bhrc.