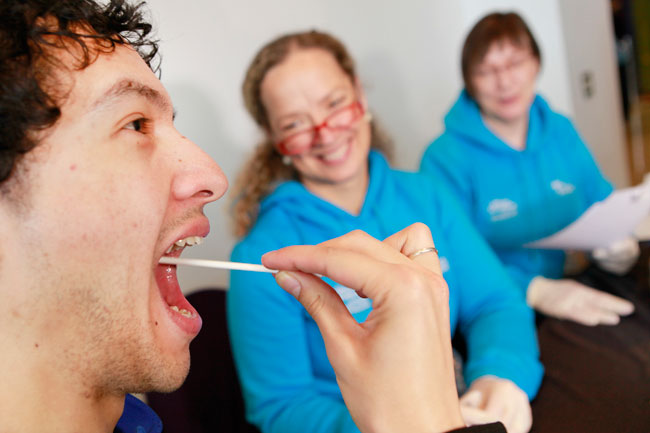 Professor Lisa Matisoo-Smith looks on as a research volunteer swabs for science – analysis of his DNA will help paint a picture of the country’s genetic diversity. Photo: Sharron Bennett.

On Sunday, members of the Dunedin community did their bit for Otago research seeking to improve our understanding of New Zealand’s genetic history.

Professor Matisoo-Smith is undertaking the first-ever survey of the genetic diversity of New Zealand’s population after gaining a prestigious two-year James Cook Research Fellowship to pursue the work.

Her sampling of around 2000 New Zealanders will allow their migration histories to be revealed through analysis of variation in genetic markers passed down exclusively through the maternal and paternal lines respectively. As well as random sampling of around 1000 people in Dunedin and four other urban centres, various ethnic communities around the country, such as Lebanese in Dunedin, are also being sampled.

In addition to collecting a DNA sample and basic personal information, the researchers are also asking about a person’s birthplace and where their parents and grandparents were born, along with their ethnic self-identification.

Professor Matisoo-Smith says the research will provide a very interesting picture of the social history of a multicultural New Zealand.

“For example, we will be able to see if the genetic history of the population of Dunedin, with its strong Scottish heritage, is significantly different from that of the Auckland or Wellington today.

Now that the Dunedin random sampling has been completed, Professor Matisoo-Smith and her team will turn their attention to sampling in other centres.

Once the project is completed, the researchers hope to be able to write a book that tells the stories of some of the various lineages that ultimately arrived here on New Zealand shores and will seek permission from some of the participants with particularly interesting lineages to tell their stories.

As well as undertaking sampling, Professor Matisoo-Smith and colleagues from Genetics Otago were also among those giving expert talks and running educational activities as part of the DNA Day at the Museum.

The day rounded off Genetics Otago’s inaugural Genetics Week, in which Centre members and invited speakers shared their specialist knowledge with the wider community through a series of lectures and events.