Breakthrough for diagnosis and outcome prediction for kidney cancers 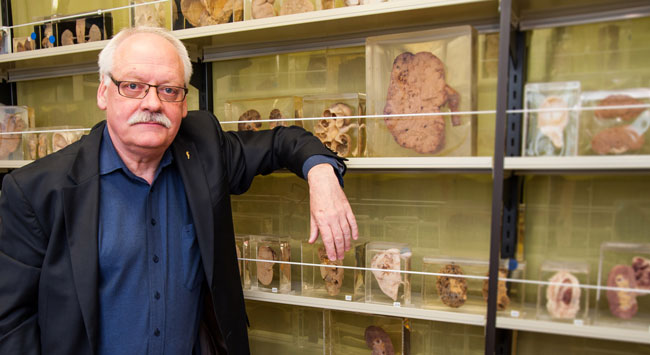 University of Otago Wellington (UOW) Professor Brett Delahunt led a team of international researchers who have changed the WHO classification of renal tumours.

The new classification is set to enhance the ability to develop treatments and more accurately predict outcomes for patients. Such tumours are diagnosed in around 510 New Zealanders each year, with numbers projected to rise to 630 by 2016.

Professor Delahunt, from UOW’s Department of Pathology and Molecular Medicine, was Chair of the International Society of Urological Pathology (ISUP) Consensus Conference convened in Vancouver in 2012 that resulted in changes to the current WHO classification.

"This will be the gospel for pathology. Prior to this, guidelines for classification, grading and staging have been seriously out of date."

He says the basis of their recommendations is a long-overdue acknowledgement that there are many sorts of kidney cancers, with different genetics, different behaviours and, ultimately, different treatments.

The new classification, combined with a new grading system that focuses on novel criteria, is set to promote a new era in renal tumour diagnosis and treatment, he says.

“This will be the gospel for pathology. Prior to this, guidelines for classification, grading and staging have been seriously out of date.”

He notes that it wasn’t until 1981 that the WHO even classified kidney cancers, and at that point for the first time came up with just two classes: “Renal Cell Carcinoma” and “Other”.

Over the years he has been involved in consensus meetings that have continued to develop this classification, recognising the need to have separate genetic and morphologic criteria. By 2004 there were nine different classes, but even that classification is now recognised as being inadequate, Professor Delahunt says.

In the decade since the last classification, Professor Delahunt has been among those at the forefront of describing the different nuances of kidney cancer, identifying a greater array that has allowed the proper classification and grouping of these tumours.

The ISUP Consensus Conference, which consisted of 133 international experts from 29 different countries, also endorsed a grading system based on novel features in the structure of the cell nucleus. This replaces the Fuhrman grading system used to date that has been highly-criticised for its unclear criteria and debated predictive value.

“Essentially what we have done is abandon Fuhrman and redefined a more objective grading system that has a proven association with outcome.”

The results of the ISUP Consensus Conference have been published in five separate papers in the October 2013 issue of the highly-prestigious American Journal of Surgical Pathology.