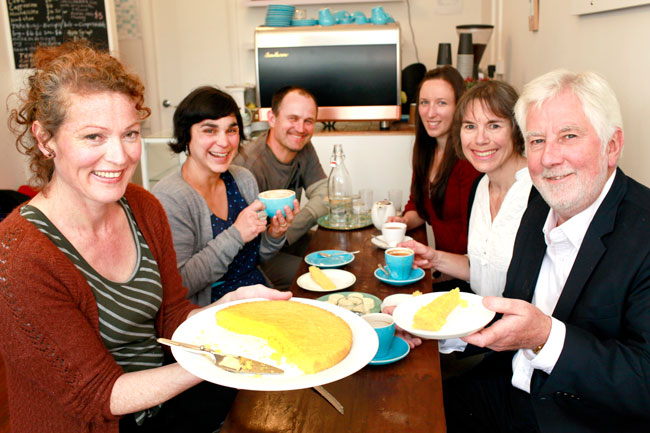 Researchers at the Edgar National Centre for Diabetes and Obesity Research adopted a novel way last week to raise the profile of, and pressing need for, better diabetes control.

They enlisted the help of Coffee Dot, a cafe in Port Chalmers, which specialises in serving smaller portions of food, and Errol Sharp, who self-manages his diabetes through dietary control, and put them together for a special public photo shoot. Pictured at the cafe enjoying a suitable afternoon tea on Tuesday are (from the front, left) Keely McGlynn (cafe owner), Jo Norton (research nurse from the Centre), Steve Walker (from the Chalmers Community Board) with (at right, from front) Errol Sharp, Dr Kirsten Coppell and dietician Kiri Sharp.

Dr Coppell, Professor Jim Mann and colleagues from the University’s Edgar National Centre for Diabetes and Obesity Research have found that by following a better diet, people with pre-diabetes are much less likely to go on to develop the disease, and people who already have diabetes will have better control of their disease, preventing the onset and progression of complications.

It was a big week for the Centre; diabetes education and prevention was also the focus for researchers during World Diabetes Day on Thursday.

“Better diabetes control and prevention of diabetes is possible through sustained sensible dietary habits. Rather than focusing on a strict diet, smaller meals and reducing the amount of unhealthy components in the diet is effective,” says Dr Coppell.

The effect of reducing portion sizes and dietary changes (on top of medication) as an important and effective strategy has recently been the focus of research at the Centre, in the Lifestyle Over and Above Drugs in Diabetes (LOADD) study.

Rather than focusing on a strict diet, advice in the study was tailored to match each individual’s socio-economic and cultural circumstances. It involved elements such as encouraging smaller meals, reducing unhealthy components in their diets while eating more fruit and vegetables.

Through the research, these experts aim to develop an appropriate programme, which could be put in place to improve the health of the hundreds of thousands of people in New Zealand living with type 2 diabetes, as well as those with pre-diabetes.