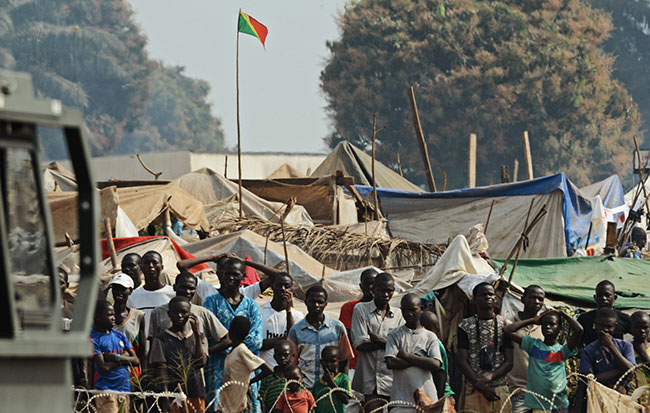 Refugees from the fighting in Central African Republic.

The forecasting model, which uses determining factors such as political instability, state-led discrimination, infant mortality rates and neighbouring state conflicts, places CAR at the top of its list of at-risk states for genocide/politicide for the period 2011-2015. The forecasts are based on data from years up to 2010, when the project began.

Researchers from the Atrocity Forecasting Project include Dr Charles Butcher from the National Centre for Peace and Conflict Studies at the University of Otago.
Dr Butcher says models for predicting genocide and politicide could help prevent these instances of mass violence.

“Changes in the number of soldiers under arms, the presence or absence of an election, and the introduction and removal of peacekeeping forces are also factors in our model that place the Central African Republic at higher risk,” Dr Butcher says.

“As far as we know, we are the only ones to rank the Central African Republic as the most at-risk country, or even have it towards the top at all.”

In recent months, the UN’s Special Advisor on the Prevention of Genocide has issued a warning regarding CAR, while violence targeted against civilians by both sides in the civil war has continued to grow in scale and brutality.

“The findings of our model justify very close monitoring and diplomatic attention on the countries at highest risk of the sort of violence we are currently seeing in the Central African Republic,” Dr Butcher says.

The aim of the project—which produces the longest-term predictions of its kind—is to provide an early-warning short list of countries most at risk of genocide, that assists government and non-government bodies in identifying potential mass atrocities while providing enough time for these groups to put preventive measures in place.

“One of our primary aims was to provide policy-makers with an early warning system that complemented shorter term monitoring and peacebuilding efforts. A key aspect of our model is that it identifies states at risk of genocide over the next five years,” he says.

The Atrocity Forecasting Project has already gained the attention of influential bodies, having given presentations on the forecasting model to relevant policy groups in Washington DC, Berlin, Paris, and Canberra, to a United Nations conference, and the International Crisis Group.

The research, supported by AusAID’s Australian Responsibility to Protect Fund, is described in detail here: http://sydney.edu.au/arts/research/atrocity_forecasting/