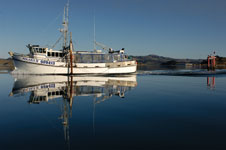 The University of Otago’s research vessel the RV Polaris has sailed to the Auckland Islands on an expedition to track climate indicators recorded in sediment deposited on the floor of the Fiords and lakes within the eastern margin of the Islands.

This is part of a research programme that aims to reconstruct how climate readjusted across southern New Zealand and the New Zealand Subantarctic during the Earth’s most recent great warming period - as the globe exited the last ice age between 18,000 and 12,000 years ago.

The eight research staff and students on board, from Otago’s Marine Science, Geology and Surveying departments, hope to gain an understanding of how the ocean currents, winds and rainfall patterns changed through this historic warming period so that they can apply their knowledge to the warming phase that the earth is now entering.

Professor of Marine Science Gary Wilson says the research being undertaken by the University of Otago scientists will collect samples to test the role that the “Roaring Forties” could play in this warming process.

“Climate models predict that the winds will strengthen and move south with a warming climate and the results of this sediment sampling work in these areas will test this hypothesis,” he says.

The Roaring Forties - a strong westerly wind belt currently centred between 45°S and 50°S - is the most prominent feature of the Southern Hemisphere climate system.

While historically better known as the power behind the clipper route, these winds play a fundamental role in the coupling of global atmospheric and ocean circulation, says Professor Wilson.

“Presently, the westerlies drive the eastward flow of the Antarctic Circumpolar Current (ACC) and the surface mixing, which in turn controls the rates of air-sea gas exchange and the contribution of the Southern Ocean to atmospheric CO2,” he says.

When added to similar samples being collected from Fiordland, the sampling in the Auckland Islands will allow the Otago scientists to measure the change across 7 degrees of latitude in a critical part of the Southern Hemisphere.

“The idea here is that we are trying to work out how the winds moved south through time as the climate warmed, so we need to take samples along a transect from north to south to pick that up,” Professor Wilson says.

The Polaris is expected to return to Dunedin on 24 February.