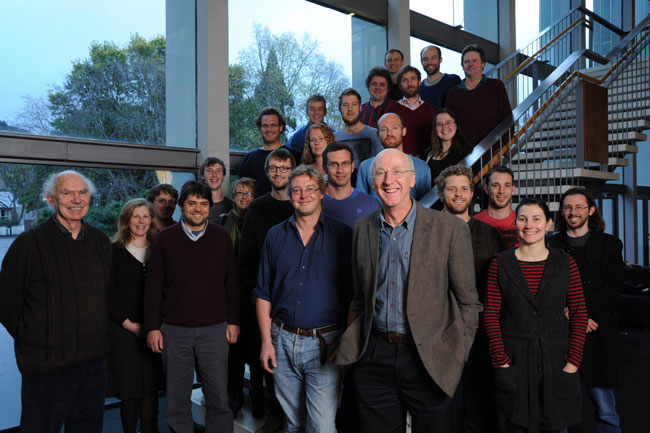 The staff of the Jack Dodd Centre for Quantum Technology.

In late 2012, the University formally recognised 14 Research Centres. Designation as a Research Centre signals the excellence and coherence of the research group's endeavours. Continuing our Research Centre Series, the Bulletin Board takes a look at The Jack Dodd Centre for Quantum Technology.

The Jack Dodd Centre for Quantum Technology (JDC) consists of eight principal investigators and 23 staff and students located in the Department of Physics. Led by Associate Professor David Hutchinson, the JDC is recognised world-wide for its excellence in ultracold atomic physics, quantum optics and related technologies.

Atomic and optical physics has undergone a renaissance since the advent of laser cooling, and the JDC has contributed to this growth through theoretical and experimental research. In fact, Bill Phillips, who shared the 1997 Nobel Prize in Physics for the development of laser cooling, was a visitor to the JDC last year. Research in the Centre spans from the fundamental to applied – including developing new techniques for precision measurement, optical sensing for medical imaging, and fundamental research on origins of turbulence in fluid flows.

Developing new technologies based on quantum physics is a key goal. Photonic technologies form a large part of the world economy, encompassing ICT, optical diagnostics, advanced sensors, and biomedical applications. The JDC engages with the high tech industry in New Zealand through the Lighthouse Platform, in partnership with the University of Auckland and Callaghan Innovation.

To find out more about the JDC, visit their website.