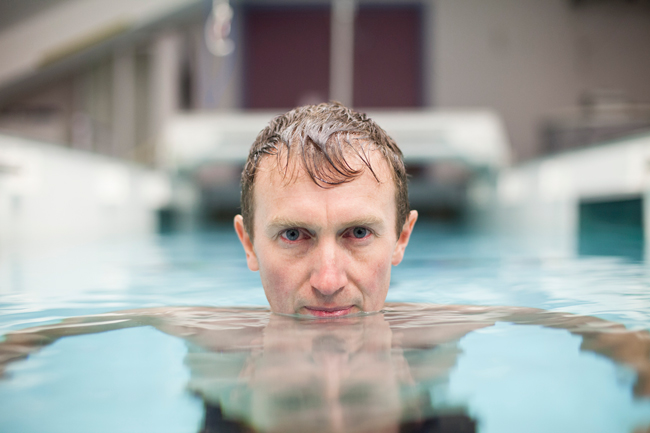 New University of Otago research has found that many drowning deaths could be prevented if people learned to wait out the body’s initial shock response to cold water.

Associate Professor Chris Button of the School of Physical Education, Sport and Exercise Sciences and his colleagues, with the support of Water Safety New Zealand, have been testing the body’s response to sudden cold water immersion. And the news is good.

Study participants who were plunged into 10 degree water in the School’s flume (pool) recovered from the cold shock response in two to three minutes. With repetition and basic mental training, the researchers found the duration and intensity of this response can be halved.

“The results were incredible,” Associate Professor Button says. “After a week or so of repeated immersions, coupled with mental skills training, and basic suggestions to improve their treading water technique, the participants were much calmer in the cold water. The change in behaviour blew me away. I have never seen a response as dramatic as this in research before.”

The findings, which have been published in the journal Aviation, Space, and Environmental Medicine, have the potential to dramatically reduce New Zealand’s horrific drowning rates.

Drowning is the third highest cause of unintentional death in this country, with 81 deaths recorded last year. The majority of drownings are thought to occur in the first few minutes after falling into the water – with the body’s shock response to cold water to blame.

"The results were incredible. After a week or so of repeated immersions ... the participants were much calmer in the cold water. I have never seen a response as dramatic as this in research before."

According to Associate Professor Button, the response is brought on by rapid cooling of the skin and is characterised by a gasp response, followed by rapid hyperventilation.

“In other words, you hit the water, you gasp, then you pant, taking fast, shallow breaths,” he says.

This is particularly relevant here in the South, where holidays are routinely spent beside by icy lakes, rivers and the sea. People fall into rivers, off capsizing boats, or are swept off rocks while fishing where, he says, they gasp, breath water into their lungs and drown.

Based on this research, Associate Professor Button and Water Safety New Zealand have put together a list of tips or practical recommendations.

They include remaining calm, waiting the cold water shock response out, and not making any hasty decisions.

“A lot of people try to swim immediately, and that’s probably the worst thing you could do,” Associate Professor Button says. “It’s really hard to swim if you are breathing twice as fast as you would normally breathe.”

The research has huge implications for learn-to-swim programmes and drowning prevention.

Associate Professor Button says he would one day like to see a survival component included in all swimming programmes, which taught people what to do in sudden cold water situations.

“With better education about the cold shock response and experiencing how you as an individual respond to cold water immersion it may be possible to significantly reduce New Zealand’s awful drowning statistics.

“This is very meaningful research to be involved in. It really could save a great many lives.”

“Combined with efforts across the sector, this research could contribute to a reduction in New Zealand’s drowning toll over time.”

The tips for survival