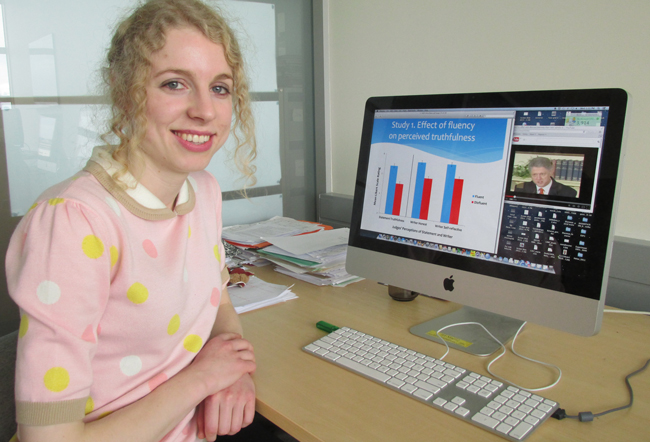 Those who speak in short simple sentences are perceived to be more honest, Otago research has discovered.

Psychology PhD student Helen Owen has been conducting experiments using sentences of varying complexity. Student participants were asked to read these sentences and judge how honest they thought the writer was being.

“We found that the simple personal statements were perceived as more truthful and, not surprisingly, the writers were judged to be more honest.”

Ms Owen says the channel through which the ‘simplicity effect’ operates is self-reflection and likeability.

"We found that the simple personal statements were perceived as more truthful and, not surprisingly, the writers were judged to be more honest."

“The writer of a straight-forward, concise statement is perceived as more self-reflective and more likeable, which influences how truthful we find their statement to be,” she explains.

This research has implications across the board in the way we communicate with one another, Ms Owen says, from those writing cover letters for job applications to politicians on the election trail. Simple and concise is the key.

“Writing concisely may not only make our work seem more valuable but helps to create a more honest impression of ourselves.”

Ms Owen, who has completed two years of PhD study, says the findings of her research have had direct implications on the way she writes it up.

“When I’m proof reading my own work, I have to work on keeping my own use of language simple but meaningful, getting rid of pointless words like the conjunctive adverbs: the ‘indeed’, ‘accordingly’ and ‘albeits’ we frequently use and see in academic writing.”

Ms Owen’s supervisor Professor Jamin Halberstadt says these findings are a perfect example of how basic research on cognition and emotion can have real and significant applications.

“In particular, we know that the way people communicate has changed dramatically, even in the past few years. If these changes create constraints on the content or form of our conversations, they may have dramatic implications for how believable, persuasive, and likeable we appear to others — and to ourselves.”