Unlocking the secrets of meiosis 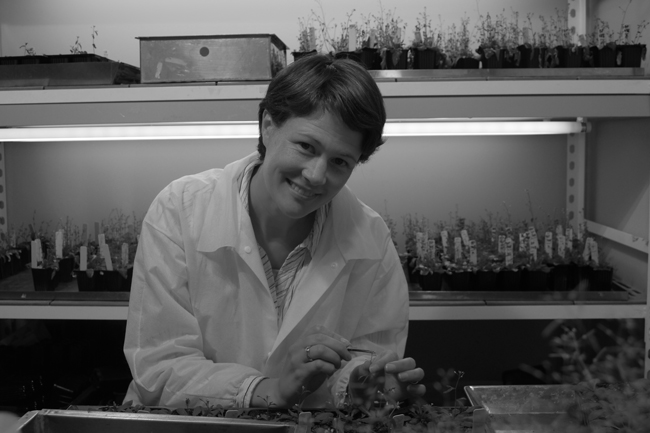 Dr Lynette Brownfield of Biochemistry is conducting novel research into the cellular mechanisms of sexual reproduction in plants.

Novel Otago-led research, published in the journal Nature Communications, has brought new understanding of the cellular mechanisms that help plants maintain their chromosome content following sexual reproduction. And this understanding may lead to better forms of plant and crop breeding in the future.

Lead researcher Dr Lynette Brownfield of Biochemistry, who has been collaborating with colleagues in Sweden and the UK, says their discovery relates to meiosis, the cell division that occurs as part of sexual reproduction.

Meiosis is designed to halve the number of chromosomes in each gamete, or reproductive cell, before fertilisation brings together the two gametes and restores the chromosome number.

In male meiosis, in many plants an unusual situation occurs where there are two chromosome separations occurring in a single cell. In such cells the two spindles, which are the machinery that pull the chromosome apart, are normally positioned on different sides of the cell.

"The more we understand about these processes, not only the genes involved but the role of these genes, the more tools we will have to engineer unreduced gametes for plant breeding."

Dr Brownfield and colleagues studied a plant model where the loss of a gene resulted in spindles that were no longer fully separated and were touching in the middle of the cell, resulting in two groups of chromosomes being close at the end of the chromosome division. When cell division then occurred these co-located chromosomes were incorporated into a single cell - a phenomenon called polyploidy.

When analysing the model they realised that not only were the spindles not in the right position, but a band of cellular material, called organelles, which is normally across the middle of the meiotic cell, was instead spread throughout the cell. Dr Brownfield says with careful analysis of these organelles they were able to conclude that this band is required to keep the spindles separated.

“While misplaced spindles had been previously observed, our work is the first that uncovers a mechanism controlling spindle separation – the organelle band. As the band is in many plants, not just our model, it looks to be a widespread mechanism.

“This is important as understanding how spindles are kept separated during meiosis, and the consequent unreduced gamete production when spindle position is disturbed, helps us understand how plants have evolved and may assist plant and food crop breeders.”

Dr Brownfield says while their discovery is still some way from being incorporated into plant breeding programmes, it is a significant step forward in understanding unreduced gamete formation.

"The more we understand about these processes, not only the genes involved but the role of these genes, the more tools we will have to engineer unreduced gametes for plant breeding.”