On board laboratory keeps Otago at top of field 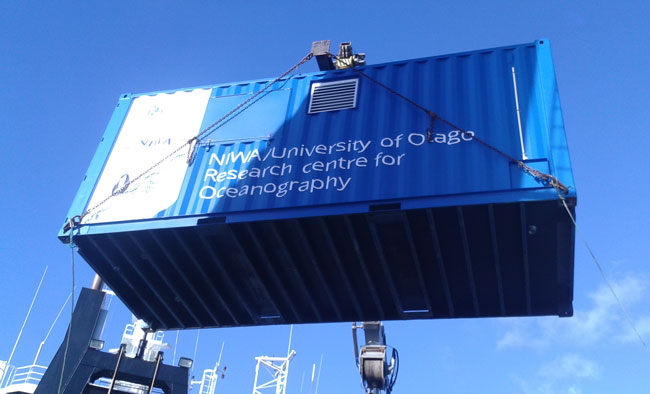 The new class 100 clean laboratory is lifted onto the RV Tangaroa for its maiden voyage last month.

The University of Otago/NIWA Research Centre for Oceanography has had a brand new shipping container turned into a clean laboratory for use on board research vessels – keeping New Zealand on the map internationally for research on marine biogeochemical cycles of trace elements.

The Centre, which was established in 1996 by a memorandum of Understanding signed between NIWA and the University of Otago, won the Prime Minister’s Science Prize in 2011.

It has just finished its maiden voyage – a three-week sampling trip on board the NIWA RV Tangaroa with Dr Rob Middag – taking samples from the Hauraki Gulf and over the shelf to the east as part of a Marsden funded research project. 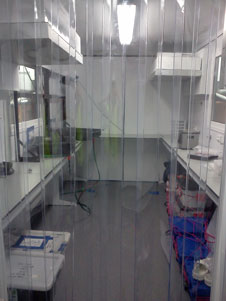 A peep inside the new container laboratory.

Associate Professor Sander says while the Centre has used modified shipping containers as on board laboratories previously, this is the first time it has had a new container fitted out professionally and for this purpose.

“The benefits are huge, because now we can be absolutely sure our samples aren’t becoming contaminated. We spend weeks cleaning our bottles in acid before the trip, and then some intense weeks working on board. We don’t want to find the samples are tainted.”

Preventing contamination is as vital as it is difficult, she says. Trace metals are present in the water in such minute amounts, that any particle from the ship, the container, or air could jeopardise the results. The new container is internally totally metal-free and the air is fully HEPA-filtered removing all airborne particles.

Associate Professor Sander says the container laboratory keeps the University of Otago/NIWA Research Centre for Oceanography at the same level as its contemporaries across the globe.

“This is especially important as we are a partner in the international GEOTRACES research programme, which aims to improve understanding of biogeochemical cycles in the oceans,” she says. “By mapping the distribution of trace elements and isotopes in the ocean we can begin to understand the processes controlling this distribution – and to establish the sensitivity of these distributions to changing environmental conditions, such as climate change and ocean acidification. All results are rigorously quality controlled and we would not want to embarrass ourselves with results from contaminated samples.”

The container will be used for coastal as well as open ocean work on the micronutrient iron, copper, and zinc, but also most other trace elements.

One of the next missions will be to the Kermadec Arc in 2016/17 on the German RV SONNE, where the Otago group is leading the trace metal sampling and analysis. Several other voyages including work in the Southern Ocean and Antarctic are also likely.