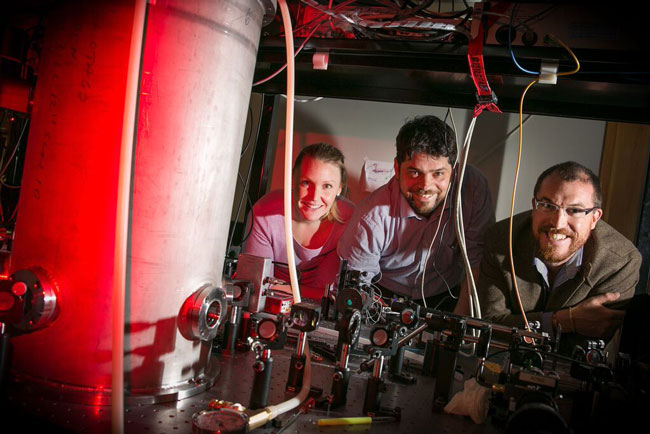 The magnet system is unique internationally and was made by HTS-110, a Scott Technology company based in Petone that is considered a global innovator in superconducting products.

Otago Department of Physics researcher Dr Jevon Longdell says that the magnet, which uses a high temperature superconductor, will be used for a number of projects by his group.

"In the past when we have had experiments that require magnetic fields we have had to do them in Australia."

“We study rare earth ion impurities in crystals that have unique optical properties. The new magnet allows us to apply precisely adjustable magnetic fields to the samples. This enables us to precisely tune the energy levels of the quantum states in our impurities,” Dr Longdell says.

Manipulating quantum states and efficiently transporting this information is a key challenge in making quantum computing a reality. Such technology would see dramatic increases in computing speed, power, and improved data security.

Dr Longdell and his colleagues are working towards a solution that involves superconducting quantum information bits and directly converting microwave photons into optical photons.

As well as enhancing their research in this area, he says the new magnet provides an important capability for much of the other work that his team will be tackling in the future.

“It greatly enlarges the bag of tricks that we can apply to these problems. In the past when we have had experiments that require magnetic fields we have had to do them in Australia.”

He says a high temperature superconductor magnet, such as HTS-110 makes, was a good fit for their situation because it did not require buying a larger capacity cryo-cooler, which would have been much more expensive.

"...it is exciting to be able to contribute to world-leading research being carried out in New Zealand.”"

“The first superconductors, discovered more than a century ago, had to be cooled to incredibly low temperatures—such as found in interstellar space—before they could carry a significant current.

“The newer high temperature superconductors, developed in the last 30 years, are useful at temperatures below that of liquid nitrogen—this is still very cold but is much easier to achieve.

Dr Fee says the magnet was an interesting manufacturing challenge.

“It is the first three-axis vector magnet—where the magnetic field can be oriented in any direction— that we have built so we had to develop a completely new design strategy.

“Almost all of our sales are to large commercial or technical establishments based overseas, so it is exciting to be able to contribute to world-leading research being carried out in New Zealand.”