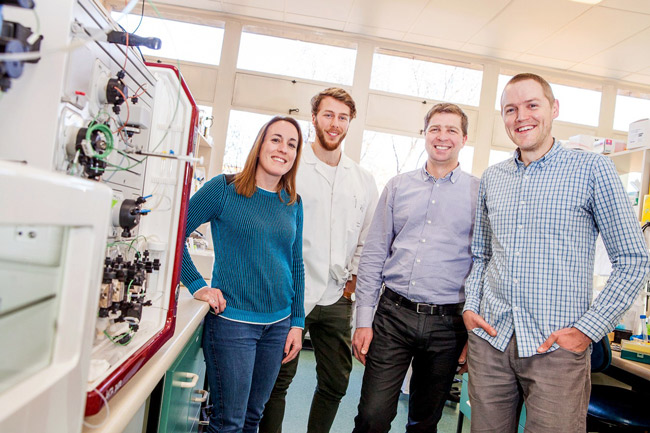 An engineered enzyme with the potential to create a simple method of testing for DNA mutations in the field — rather than in a lab — has won the 2016 Otago Innovation Limited Proof of Concept Grant competition.

It is the 10th anniversary of the introduction of the Proof of Concept Grant and this year it carries a $60,000 prize — an increase on the $50,000 awarded in previous years. The prize can be used by the winning researchers to accelerate the development of their concept towards commercialisation.

The enzyme, engineered by PhD student George Taiaroa, his co-supervisor Associate Professor Richard Macknight, and protein biochemist Dr Peter Mace, all from the Otago’s Department of Biochemistry, causes a new reaction that quickly shows if DNA is carrying a mutation.

Being able to carry out an easily-performed test on blood or saliva in remote locations — for example a rural village in the developing world — could greatly improve the treatment patients receive by letting medical staff see if a person has an antibiotic resistant strain of bacteria or a particularly virulent form of a virus.

The enzyme could also be used to detect DNA mutations characteristic of certain cancers, to help clinicians select the ideal treatment strategy. There are also applications in agriculture, including developing new plant varieties and in bioprotection.

'It is hoped the test could be produced in a form similar to a pregnancy test, where a sample with a DNA mutation sparks a simple colour change that is different to normal DNA.

Associate Professor Macknight says there is scope to work with international companies which specialise in these types of simple, portable tests.

The team plans to develop and validate the enzyme over the next year.

The enzyme could also be used in to bring to life two novel methods for DNA testing the team developed last year, which was the winning entry for the 2015 Health Sciences Translational Research Grant. Using the enzyme in that way is expected to provide more robust results in varying environments in the field.

Working with other applicants

"Although there was only one winner, we are hoping to work with several of the remaining applicants to help them progress their idea commercially."