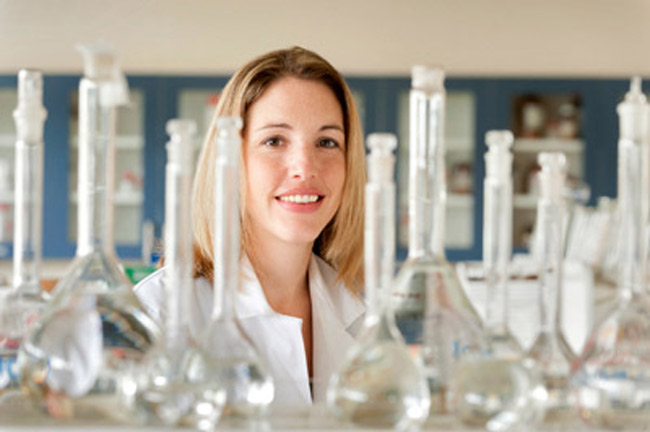 An Otago academic has won the annual Emerging Innovator Award at the KiwiNet Research Commercialisation Awards, for her work harnessing silver nanoparticles to treat and prevent dental disease.

University of Otago and the MacDiarmid Institute’s Dr Carla Meledandri was announced as joint winner last night of the Norman F. B. Barry Foundation Emerging Innovator Award with the University of Canterbury’s Dr Daniel Holland, whose work focuses on mathematics plus measurements equals economic benefit.

"in my case, working toward this goal has required a great team effort over the last several years."

Dr Meledandri feels proud to have been able to contribute to a celebration of Kiwi innovation, saying: “The process involved in the translation of academic research into commercial outcomes is not always an easy one, and in my case, working toward this goal has required a great team effort over the last several years.”

“I am delighted to have received recognition for our success so far.”

The Department of Chemistry’s Professor Lyall Hanton says Dr Meledandri’s success is testament to the innovative multidisciplinary work she has done with her group and colleagues in Dentistry.

“It is a very bold move on Carla’s part to be attempting to commercialise her research at this stage of her career. Commercialisation is always an interesting journey and is never straightforward but the Chemistry Department has considerable experience in translating its research. So Carla has colleagues to talk things over with.”

“Also Carla has been ably assisted by staff from Otago Innovation Limited. It is an exciting time to be in Chemistry.”

The awards are designed to celebrate commercialisation success in New Zealand’s universities and Crown Research Institutes, and were announced at a reception in Auckland.

"sometimes even science that is initially seen as operating in the fringe ends up creating immense commercial value for the New Zealand economy."

KiwiNet General Manager Dr Bram Smith, says, “There are so many exciting examples of science powering business innovation in the research community. To quote one of the finalists today, sometimes even science that is initially seen as operating in the fringe ends up creating immense commercial value for the New Zealand economy. That’s a story we see often in research commercialisation. Whether it’s using gaming technology to find oil, using lasers to increase productivity in the dairy industry, or fungi instead of fungicides to help plants grow, the opportunities are as diverse as they are exciting.”

Lead KiwiNet Awards judge and KiwiNet Investment Committee member Dr Andrew Kelly, Executive Director at BioPacific Partners says, “Yet again the standard of entries for the KiwiNet Awards continued to rise. It was notable that more sophisticated commercialisation processes are being used such as public private partnerships and long term research business collaborations. The sheer level of entrepreneurial talent was also impressive.”

BNZ Head of Agribusiness, John Janssen, says, “Today’s winners have developed some clever high-tech innovations that will create a range of new businesses and contribute to a high achieving New Zealand. We’re very pleased to be celebrating their dedication to innovation and their success.”

The Kiwi Innovation Network (KiwiNet) www.kiwinet.org.nz is a consortium of 16 universities, Crown Research Institutes and a Crown Entity established to boost commercial outcomes from publicly funded research. Principal support is also provided by the Ministry of Business, Innovation & Employment.

BNZ Supreme Award – for overall excellence in all core areas of research commercialisation:
· Associate Professor Cather Simpson, University of Auckland and the MacDiarmid Institute: From sensors to sperm sorting - lighting up NZ’s economy with lasers

For more information on the KiwiNet Awards winners see https://kiwinet.org.nz/Awards/Awards2016