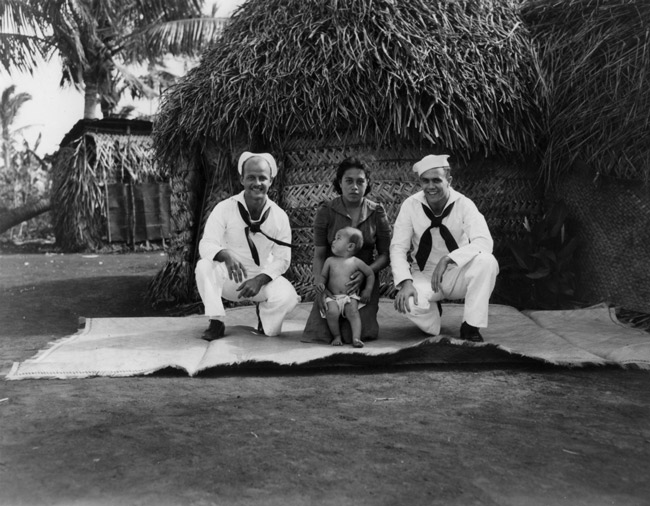 In the Pacific ... a baby, mother and two American servicemen.

Anyone who grew up without knowing their father cannot help but be touched by the final outcome of one of the most heartrending Marsden-funded research projects undertaken in recent years at the University of Otago.

Following more than five years of fact-finding, interviewing, and looking into every historical nook and cranny, a team of Otago researchers from the Department of History, led by Professor Judy Bennett, has completed the book Mothers’ Darlings, which is now taking pride of place on the shelves at Otago University Bookshop.

The University’s Professor Judy Bennett has her picture taken with Letisia — at Koqeva on Guadalcanal, Solomon Islands — one of the few surviving Melanesian mothers of a child of an American serviceman.

The research team focused on World War II, which brought two million American servicemen to the South Pacific where they left a human legacy of some thousands of children.

At the launch of the Otago University Press-published version of the book last week, Publisher Rachel Scott said everyone involved, from authors to researchers, had also been detectives, counsellors and confidantes.

“They have witnessed grief and loss, but sometimes also reunion and joy. What a roller-coaster it must have been,” she told a packed function at Te Tumu. 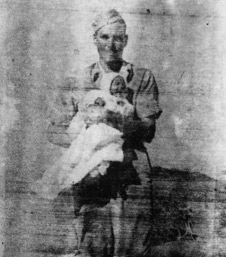 An American soldier holds a baby.

The University’s Professor Judy Bennett has her picture taken with Letisia — at Koqeva on
Guadalcanal, Solomon Islands — one of the few surviving Melanesian mothers of a child of a US serviceman.

Professor Bennett’s colleague Professor Barbara Brookes also spoke of her admiration for the effort that went in to the book.

“Judy Bennett, Angela Wanhalla and the team of authors have not only recorded the events of those years in order that we may learn of the impact of the American’s sojourn, but have also assisted families to learn about their past. This is a history of affective relations which has had an intimate impact on people’s lives.”

Professor Bennett said that at the heart of the book were the people who deserved the most appreciation — from the Solomon Islands to Kiribati to New Zealand, Samoa, Tonga, the islands between, and thousands of kilometres beyond — people who shared their stories and trusted the team with a significant part of their emotional lives. 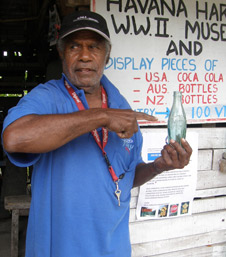 Earnest Kaiokoa outside his WWII Museum on the west coast of Santo. He is an expert on Coca Cola bottles and the effects of the war.

Each chapter focuses on an island story, tracing the impact of the American forces on places, communities and families. At the centre of each island story are personal and emotional accounts of love, loss and grief. United States immigration law at the time prevented couples marrying “across the colour line”.

“We hope we have fulfilled the trust in this book by centralising those silenced by archival absences; those ignored or erased in the military and colonial records — the women and their wartime children of the South Pacific (Area) Command. We hope these people now have a firmer place in the history not only of our Pacific region but also of World War II’s far reaching effects across the globe,” Professor Bennett said.

Some of the eleven chapters are more group portraits, two consider a single case in depth, another follows an adopted child’s life and an American family member’s search for a Pacific-born relative; most consider the reasons why marriages were virtually impossible, given US legal strictures and the power of the military.

What emerges in all the chapters are common themes of love, fear, yearning, silence, identity, race, and the search for fathers, half-siblings and, occasionally, mothers.

“When children resulted, there could be no real end to the story of the relationships created by these wartime unions of indigenous women with US servicemen,” says Professor Bennett. 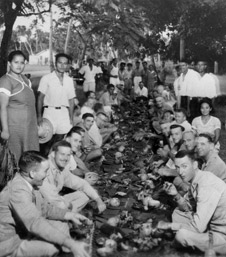 The best of hospitality for American servicemen ... island people play host during their time in Aitutaki, Cook Islands.

“We found again and again that so many we interviewed wanted help to trace their father or grandfather in the US and get to know something of the lost side of their family. As we note in the book — we all yearn for the history of our blood and the geography of our bones — these are the font and origin of our humanity.

“This was further demonstrated when we addressed our findings to a wider audience who might not always read history books. I believe that, especially with Marsden-funded research, we have a duty as well as an obligation as scholars to communicate our research beyond the walls of the academy.”

The book follows on from the film produced by Otago graduate Steve Talley and US-based Peggy Holter, funded by a University of Otago special grant and with the co-operation of TVNZ. The documentary, Born of Conflict: Children of the Pacific War, was screened on Anzac Day 2014 on Maori TV and is now on YouTube. It was also screened in Samoa.

For people seeking information about their background, the research team has both an appendix in the book and a website with advice and suggestions about how people can help themselves and so begin to demystify the process of searching for Pacific fathers, grandfathers and possible half siblings. 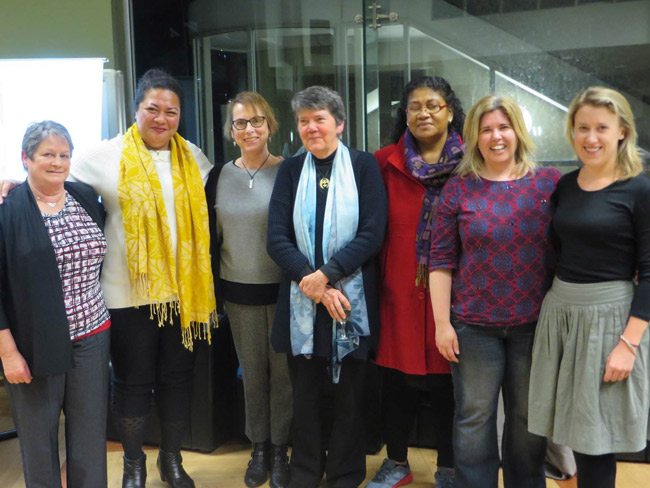