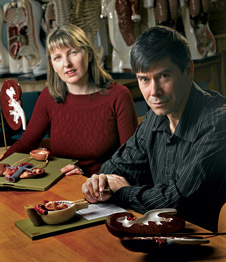 Fresh insights into a rare but lethal human genetic disorder have been gained by New Zealand scientists studying the equivalent condition in sheep.

The disease, called Meckel-Gruber syndrome, is a severe disorder that usually leads to infants dying before, or shortly after, being born. Fatal kidney, liver and brain abnormalities are commonly present in those affected.

Now a team of scientists led by the University of Otago’s Professor Mike Eccles, studying sheep with same condition, have identified key mutations that likely underlie the syndrome.

The ground-breaking research, which recently appeared in the leading international journal Scientific Reports, involved 23 authors from Otago, Massey and Auckland universities and AgResearch and represents nearly two decades of work.

Professor Eccles says that the landmark efforts of New Zealand scientists in mapping of the sheep genome were key to the findings that the team produced.

Thanks to this work we have now been able to identify the genetics behind the disease. A faulty gene causes an anomaly of the cells in kidney, which is that their primary cilia on the cell surface look very distorted, are very long and are fragile, as they appear to be susceptible to breakage.

Cilia – the term comes from the Latin for eyelashes – are key elements of cells that perform various vital physiological functions such as sensing changes in the cellular environment and signalling when cells have become damaged and need replacing.