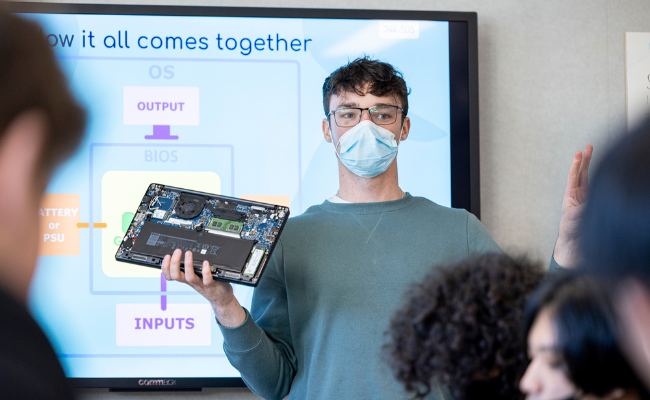 Owyn Aitken is majoring in Data Science, minoring in Public Health and Finance.

The 19-year-old student is majoring in Data Science, minoring in Public Health and Finance. All this whilst the co-founder of Remojo Technologies, a social enterprise which refurbishes secondhand laptops for those in need.

Owyn attended Aotea College in Porirua where he first begun “messing around with computers” with his best friend and would be co-founder of Remojo Tech, Hadi Daoud. The venture began under the Young Enterprise scheme established in secondary schools and providing mentorships, access to networks and funding.

“Remojo Tech was established as part of the scheme and a love for technology. We witnessed the need for devices among our peers, before realizing the potential scale of the issue.”

Cost effectively addressing the issue meant turning to broken computers and laptops, pulling them apart and troubleshooting the problems. It wasn’t long before the deemed broken devices were given second lives.

“After messing around with the devices, we began facilitating workshops around the country. Getting groups such as schools to pull computers apart, teaching them how to fix computers and get them up and running again.

“Our aim is to put devices in the hands of students while also addressing the digital divide. There is huge inaccessibility to devices in Māori and Pacifica communities. There’s also a stigma around digital literacy and digital skills – people coming in thinking it’s more difficult than it is. Some kids have never used a laptop before in their life but we notice they excel in our workshops.”

Through the establishment and success of Remojo Tech, Owyn and Remojo Tech partnered with Recycle a Device (RAD), an Aotearoa initiative which matches those who need a laptop with one that is donated and refurbished. 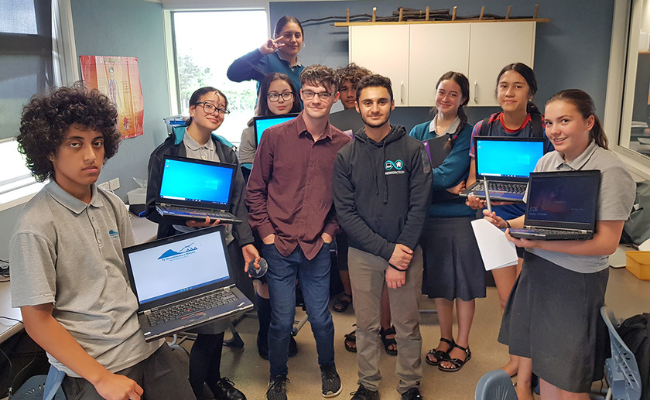 “Our aim is to put devices in the hands of students while also addressing the digital divide.

RAD was established in 2020 during the COVID-19 lockdown where Owyn and Hadi saw the digital inequity within their school. The need for a device has always been there, computers are becoming a necessity and make a huge difference in people’s lives.

“During COVID, students were expected to have access to the internet to continue their learning, and many kids could not do that. When lockdown hit there were some students who did not have access to a device for months which led them to fall behind, hence the idea came about to refurbish laptops and give them out to students in need.

“There are many good quality devices that are no longer needed in our communities. Spark New Zealand have been a major contributor of laptops, donating them after around three years of use. The Ministry of Education are also coming onboard.

“The kaupapa is very rewarding. From resourcing a single mother with a device allowing her to apply for jobs to getting students to attend school because technology is a passion of theirs.

“Working with kura kaupapa like Te Wharekura O Mauao, Pacifica community groups and churches has been special especially when you see the outcomes.”

Greg Scrivin, an Otago alumni and current bilingual science and digital technology kaiako at Te Wharekura O Mauao shares his appreciation for the contribution Owyn and RAD have made for their rangatahi and tauira.

“The work done by RAD is making a real difference to people’s lives. Some of our tauira come from rough backgrounds but the doors and possibilities are swung open by equipping them with a device.”

The ongoing demand for workshops and devices around the country continues to be the biggest challenge faced by Owyn and RAD.

“We are doing our best to train up rangatahi across the country to be able to deliver the workshops and help with repairs to meet demand. Other challenges include sourcing funding and resources to sustain this kaupapa, we are always grateful for support,” he said.

“We are also working toward being able to deliver the kaupapa in full Te Reo Māori across the country, which is really exciting.”

When asked how Owyn was coping with also being a full-time student, he laughed but was adamant he’d make it work.

If you have devices to donate or want to offer financial support, get in touch on the website.