Ones to Watch: Daniel Cocker 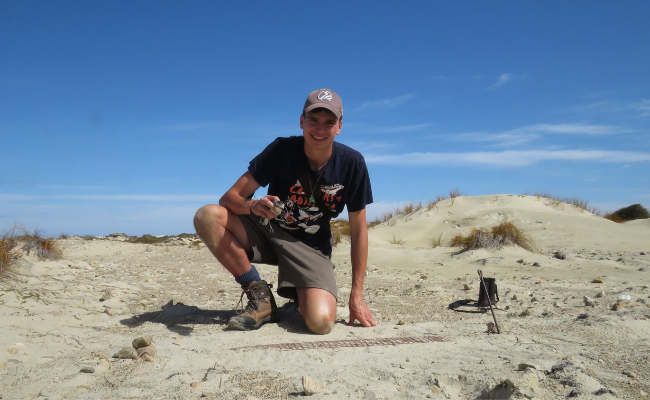 Campaigning for the Southern Dotterel kickstarts a career with purpose.

As Bachelor of Science (Zoology and Māori Studies) student Daniel Cocker’s time at Otago draws to an end, he’s preparing to embark on another exciting adventure.

“I’m starting a job with the Department of Conservation (DOC) on Stewart Island/Rakiura a few days after my final exam.”

The Southland-born and raised student says working with endangered species has always been his dream.

“I’ll be joining the Dotterel team – nest monitoring, bird counts and pest control. The job means I’ll be spending between five and ten days at a time in the bush which is going to be a change from the Dunners lifestyle.”

The role came out of a summer studentship with Environment Southland which Daniel did during the last few summers of his studies.

While preparing for his new role, Daniel has been raising awareness for the critically endangered Southern New Zealand Dotterel (Tūturiwhatu).

“They have a total population of only 144 and are on the brink of extinction.”

To help raise awareness he has been campaigning the Dotterel in ‘Bird of the Year’.

The once widespread bird became extinct in the South Island following the introduction of stoats.

“They now only breed on the mountain tops of Rakiura in the summer and feed on some estuaries/beaches in Southland during the winter but are being wiped out be feral cats. The Southern dotterels are not well known about in NZ and get almost no media attention.

“Most people only know of the Northern NZ dotterels who breed on beaches up in the North Island and have a population of well over 2000 and get a lot of media attention.”

Daniel is keenly anticipating the completion of his exams so he can get stuck into making a practical difference to the birds he feels so passionately about.

“I’ve really enjoyed my time at university. It’s been nice this year being able to meet other people doing the same degree and getting to know my lecturers properly.”

There is one other important factor which has fuelled Daniel’s drive to complete his degree.

“University was often not something I considered. We never thought I would be able to afford it. My grandfather paid for my accommodation and supported me in getting here. He passed away last year and I’m sad he won’t be here to see me graduate. He’s a big part of why I’m at Otago and I’m trying to make him proud.”

Voting for Bird of the Year opens on Monday 17 October.