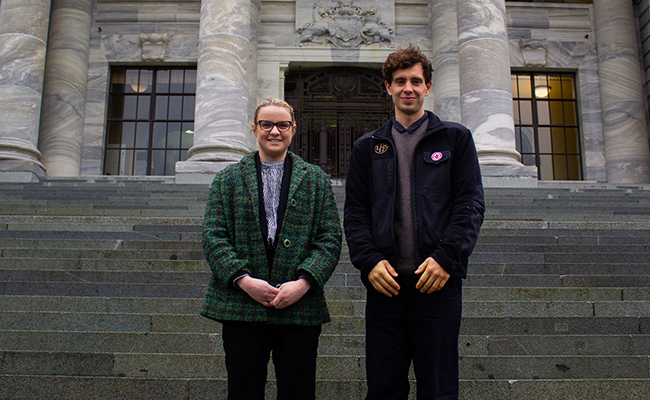 A member of the Young Nats and a member of Young Labour walk into a bar.

What you might not expect is that they are there to celebrate the success of their new joint venture over a drink.

“Finn is from the Left and I’m from the Right and we want to show that you can have a debate on politics and still come out mates at the end of it,” says self-proclaimed “political nerd” Eve.

The podcast already features the likes of Sir John Key, Chris Hipkins and Shane Jones, with more high-profile politicians in the pipeline.

“We’ve had incredible access right across the political spectrum.

“We had a couple of contacts between us for different politicians and then for some of them we just literally found their emails off their website.”

Their podcast captured significant media attention when guest Sir John Key said he would have voted for Donald Trump in the 2016 US election. 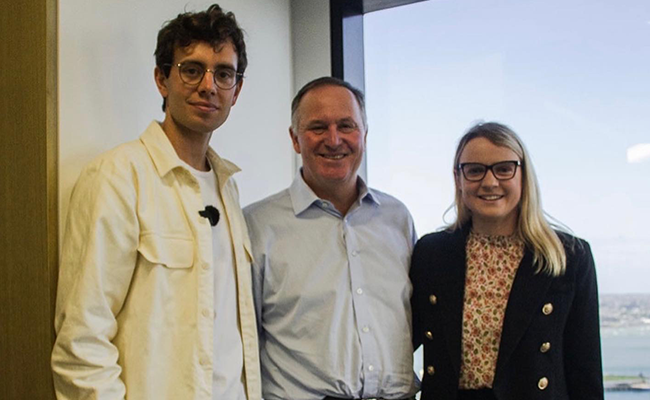 The idea for a podcast was conceived in February this year, and since then the pair, joined by their sound technician Thomas Greenaway, have travelled around the motu visiting past and present politicians.

“It was pretty surreal. Dame Jenny Shipley, the first female Prime Minister of New Zealand, we were invited into her house. It was kind of like a pinch-me moment.”

Eve and Finn want to attract a younger age demographic after observing a low voter turnout among New Zealand youth in the last general election.

“Politics is in everything we do. From the quality of the roads we drive on, to the price of our groceries. It’s involved in how clean the air we breathe is and how much of our income we get to keep,” Eve says.

At the heart of the duo’s friendship is a mutual love of politics.

“I love the aspect of having the ability to enact change and make a difference.

“The Young Nats have had policies that we’ve come up with that have actually gone on to become law. 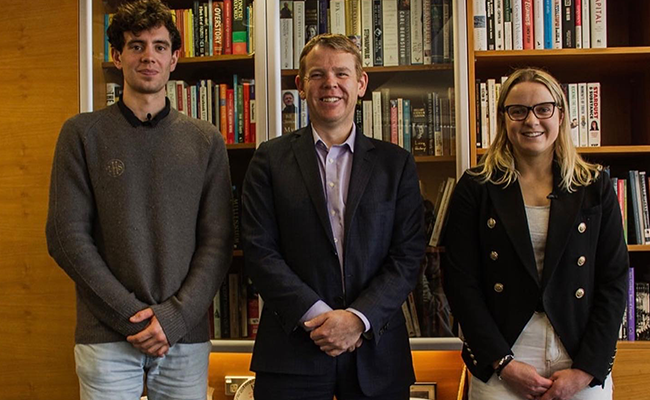 Finn, who is a PhD candidate at University of Canterbury, is the founder of Carbonz, Future Farmers NZ, a farming policy group that unites young people from across the political spectrum on environmental farming policy.

Eve’s passion for the Right started from an early age. She attended her first political conference at age 13 and has contributed to National’s campaign efforts for several elections.

She inherited her love of politics from her grandfather, who was the electorate chair for previous Speaker of the House of Representatives, Sir Alexander Lockwood Smith, and her father, who used to be on the board for the National Party.

Eve wants to encourage more New Zealanders to get comfortable with disagreeing.

“When debating politics, it’s important to not take it personally. If you do, you remove the ability to have real discussions about ideas.

“After recording the podcast Finn and I will go have a drink and discuss other things.

“It’s cool to disagree. I find it boring when people agree with you all the time because it creates a kind of echo chamber.”

She says her politics minor has given her another perspective on politics.

“A lot of stuff that we’ve done has been very left-wing, something I hadn’t initially been that comfortable with, but I think it’s opened my eyes on broader perspectives.”

There are two basic messages Eve hopes to leave her audience with.