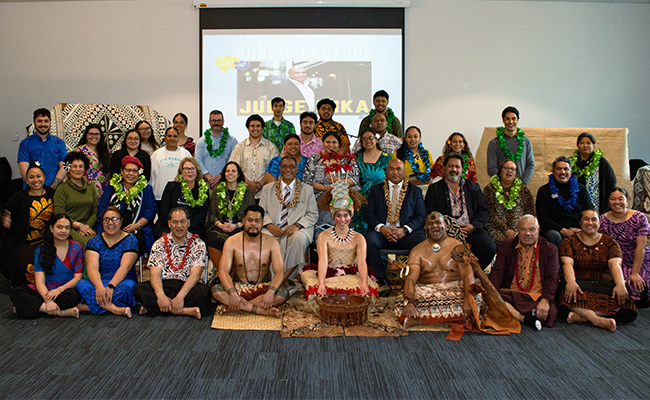 Judge Michael Mika was welcomed to the University with an Ava ceremony.

Twenty-five years after graduating from Otago esteemed Pacific judge Michael Mika returned to the University to inspire a new generation of law students.

He has paved a successful career as a Mīharo Trust founding member, PRLaw Director and Deputy President of the Invercargill Licensing Trust board.

Introducing Judge Mika at the recent event, Dean of Law Professor Shelley Griffiths said “the Pasifika community and particularly PILSA make huge contributions to the vitality and vibrance of the faculty.”

Judge Mika spoke about his upbringing in Lower Hutt, where he serves as a district court judge, and the role of his parents and Pasifika identity in shaping his career path.

“One of the most precious gifts we were given as children was Gagana Samoa.

“My heritage and my culture make up the fundamentals of who I am.

“It can be uncomfortable to be the only brown person in the room, but try and view it as an opportunity to be a cheerleader for your people.” 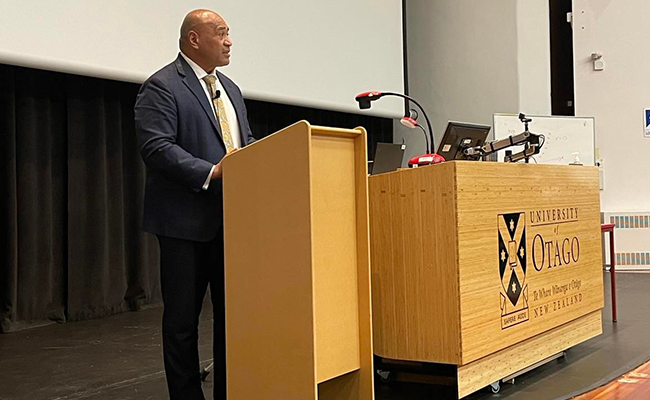 Judge Michael Mika was recently made the first Pacific district court judge outside of Auckland.

Judge Mika encouraged Pasifika law students to seek an employer “who will allow you to serve your community”.

“Recognise that it’s about people and about the service you can provide your clients.”

He related this to “Te Ao Mārama”, the ongoing kaupapa being implemented in the district court that he said “acknowledges the connectedness of both the individual and the communities” and focuses on “restoration, rehabilitation and hearing” through traditional practises that are “important for helping Pasifika clients”.

“We have observed that cultural dislocation has an underlying connection to offending.”

Though PILSA President Shani McMullan says the organisation of this event was a “team effort”, she is particularly grateful to Division of Humanities Pacific Islands Students’ Support Officer Sia Lei-Mata’afa and Pacific Community Engagement Manager Tofilau Nina Kirifi-Alai for their work on it.

Judge Mika was welcomed to Otago with an ava ceremony, which both staff and students helped coordinate.

Shani says “seeing Pacific people in the legal profession, particularly becoming judges, inspires us as Pasifika law students and breaks down the barriers in our minds as to what can be achieved".

“There is something really special about the bonds between Pasifika in law. We are all connected by our shared values and experiences studying and working in a profession that remains largely pākehā,” she says.

“As Judge Michael Mika said, seeing someone ‘who looks like you’ is so important.” 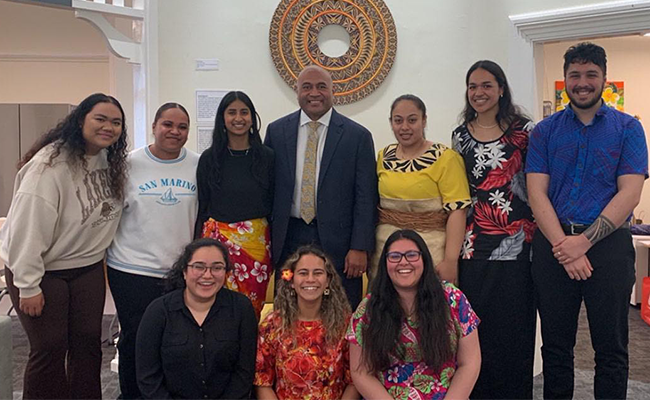 She says that while Judge Mika’s achievements in the legal profession and on the sporting field are “amazing”, the members of PILSA were more struck by his character and what a kind man he was.

On the matter of ways Pasifika youth can be encouraged to pursue law, Judge Mika stressed the importance of role models and representation during his lecture.

Addressing the Pasifika law students in the audience, he said “all of you are the answer to how we can better represent ourselves as Pasifika”.

As a child he was deeply inspired by Sir Bryan Williams, who was both an All Black and a lawyer, he told them.

“Having that modelled for me made me believe that you really could have it all if you worked hard enough.”

Following a similar path, Judge Mika realised his potential as a professional rugby player while studying at Otago, initially playing for the University before catapulting to the Highlanders and later, playing internationally for Manu Samoa.

“I feel fortunate that I didn’t have to choose between the two things that I love,” he said.