Reservist of the Year: “I’m not superman, I’m just a dude doing his thing” 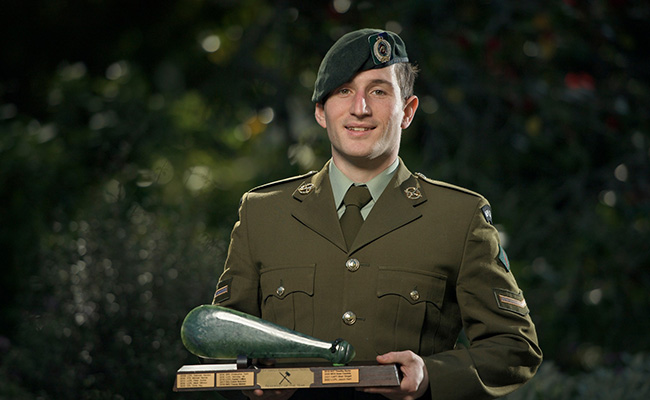 Helping build a positive culture in his army unit has helped one busy Otago medical student become the New Zealand Defence Force’s 2022 Reservist of the Year.

Jason Hart, who holds a Lance Corporal rank, was recently presented the award at a ceremony in Christchurch.

He joined the NZDF Reserve Force in 2018 after going on a 72-hour expedition as part of the military module of a scholarship business leadership camp for young leaders.

“It was pretty cool. I really enjoyed the physicality of it, the team environment and how the soldiers carried themselves.

“I dug a little deeper into what they did, and they mentioned about the Reserve Forces. So I jumped at the opportunity and have never looked back, really.”

A member of the 2/4 Battalion, Royal New Zealand Infrantry Regiment, Jason, who says he felt honoured just to be nominated for the award, was named as Reservist of the Year before a room full of comrades, his commanders and his mother.

“Mum cried when it was announced. It was wicked to share the moment with her.

“Mum doesn’t really get an insight into my army life because it worries her and I don’t want her to stress, but it’s really cool that she could be there and she could see a little insight into that life.”

Jason’s fellow soldiers performed a haka for him as he took the stage to receive his award, a gesture he says he found “really moving”.

The determination that earned Jason the honour also appears to have served him in other areas.

He says it was due to his passion for sport in high school that he did not initially get University entrance and had to resubmit assignments to achieve it.

Instead of going straight to university he took a gap year to travel. During the year, he competed in the age group world championships of underwater hockey where his team won a silver medal. He then spent four months volunteering for Israel’s ambulance service, which ignited his interest in healthcare.

When he returned to Aotearoa, he applied for medicine at Auckland University but did not initially get in.

Completing a sports science degree instead, he then applied for medicine for a second time. After receiving news that he did not get into the programme once again, he explored options in Australia, but was also unsuccessful.

“After that, I thought my medicine hopes were over so I spent four years working in a few different things.

“I joined the army in that period, I worked for an experiential marketing company for a bit and I ran sports events.”

On a whim, he decided to give medicine one final crack and was elated to get into the programme at Otago.

Now approaching his fourth year of medicine, Jason will be moving to Christchurch for his first year of clinical placement. He will transfer to an army unit in Christchurch but says he will miss the “special group of guys and girls” he trains with in Dunedin.

“I wouldn’t be where I am without them and they’re a good supportive unit for University students and people in general.

“They understand that we’re reserves and we’ve got lives outside of the army so they really take care of us and tailor the training around our needs.

“They’re awesome, and our command team are second to none.”

As well as the army and university, he built and runs an online tutoring platform, helps to run large-scale junior sports events around the country and hosts a business podcast called ‘The Daily Jase Live Show’.

He hopes to become an emergency doctor one day, and intends to “build a couple of businesses” on his way to “help the wider community outside of medicine”.

The third year medical student shows no signs of slowing down in his professional development.

He makes light work of juggling his several occupations but says “it doesn’t go without it’s stresses”.

“I’m not superman, I’m just a dude doing his thing.”

“I’m like any other student. There are times when I need to knuckle down for exams and there’s time where I’ve got a bit more leeway where I try to get involved in my army life and other areas. It’s just about balance and aim to keep moving forward.

“You just do what it takes I suppose. I have pretty big goals that I’ve set for myself so have to back them up with actions to reach them.”