Giving Taranaki students a chance to attend Hands-On at Otago 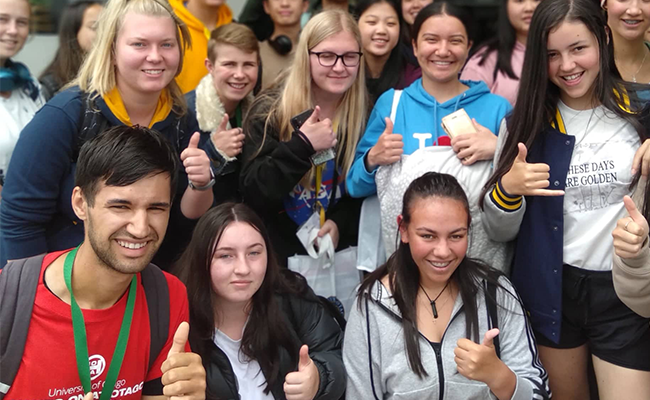 Otago student Tane Whitehead, in the red shirt, with some of the students taking part in Hands-On at Otago.

One former Hands-On at Otago attendee valued his time at the event so much he now not only works as a Hands-On at Otago red shirt, he is also making sure other young people from his North Island province get a chance to attend.

Hands-On at Otago is an event held in January each year that gives about 400 Year 12 and 13 high school students from around Aotearoa a week-long taste of life at the University of Otago.

Tane Whitehead, who is about to start his honours year at the University of Otago, first heard about Hands-On at Otago in 2018 when his high school physics teacher encouraged him to go. 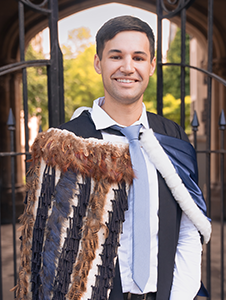 The cost to attend – including event fees and flights – was a barrier for him, but fortunately he was awarded the Poutama Scholarship which covered the costs, and made it down for Hands-On at Otago 2019.

“That was my first ever plane flight, it was a bit daunting, and the longest time I’d ever been away from Taranaki,” he says.

On arrival he made a lot of friends and soon learned there were a lot of people facing the same uncertainties he was, such as not knowing what life would be like at university, which university to attend, or if university was even the right thing to do.

Without the Poutama Scholarship and Hands-On at Otago it was unlikely he would have considered studying at Otago.

But for a lot of people in the North Island, the travel distance and cost of attending the event can be a barrier he says.

As a result, not long after starting his degree in Exercise and Sport Science, and Economics in 2020, Tane decided he wanted to “give back” by creating a scholarship to ensure other students from low decile schools in Taranaki could attend Hands-On at Otago.

Tane emailed several businesses and eventually secured one that was happy to fund the Taranaki Hands-On at Otago Scholarship. 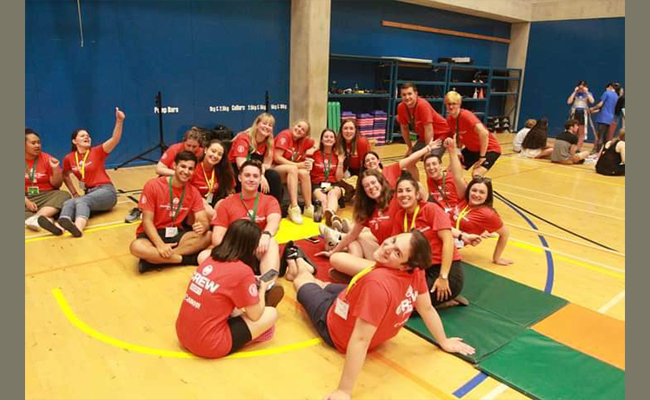 Tane with some of the other people working as red shirts at Hands-On at Otago.

The scholarship was first awarded to someone to attend Hands-On at Otago in 2022, though COVID-19 restrictions meant the person could only attend an online version.

With several more businesses jumping on board to help fund the scholarship, it has been able to be awarded for a second time.

“She’ll (the 2023 scholarship recipient) be here next week, the first one to (physically) come down to Hands-On at Otago,” says Tane.

He has a lot of time for the event and has worked as a “red shirt” – someone who acts as an RA of sorts in the college where attendees stay for the week of Hands-On.

That made for a “a very busy week”, but was also very rewarding, he says, and gave him another opportunity to meet and support students and let them know they’re not alone.