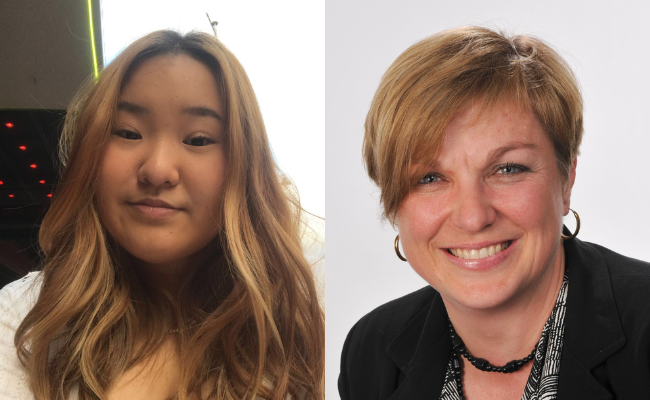 Their commendations were for the business concept proposals they submitted alongside their respective team members, who were based all across the globe.

Their business cases were in the top six out of 137 submitted proposals and had to incorporate a United Nations Sustainable Development Goal using limited capital.

Harry worked alongside team members from Indonesia, Jordan, China, the Netherlands, Switzerland and Kenya to develop a proposal entitled ‘Walk and Save’.

“This concept involved minimising China’s carbon footprint by offering reduced car insurance premiums to people who reduced the use of their vehicles,” Harry says.

“Ultimately, we felt a financial incentive was a great practical way to encourage people to reduce their emissions even though I initially felt a bit wary putting this pitch forward.”

He says he was slightly “sceptical and nervous” when he committed to the GEE but, looking back now, he realises those were just initial “fears of the unknown” and he is glad to have taken part in the competition.

“I am extremely glad I participated and am very pleased to hear that I was a crucial reason why our team succeeded,” he says.

“Although there were several issues surrounding time zones and language barriers, I came out of this experience having gained new competencies and am extremely glad to have been a part of it and stoked to have received such a prestigious award.”

Their team, group 78, focused on combatting deforestation in Sierra Leone which inspired the idea for mining companies to rehabilitate and reforest the land they took resources from by establishing tree seedling nurseries.

“I found about the GEE during one of my Interpersonal, Intercultural and International Business Communication classes, which is a part of my Bachelor of Commerce,” Jessie says.

‘I am deeply honoured to have been a part of a highly commended team as I feel we worked very hard to present a practical and purposeful business concept.”

Dr Virginia Cathro, from the School’s Department of Management, supported the students in taking part in the GEE and is “elated” to hear about Jessie and Harry’s success.

“They have represented both themselves and the University so well in their hard work and the Department is impressed by their cleverly designed sustainable business concepts,” Dr Cathro says.

“We look forward to seeing where they go from here.”

The School’s Pro-Vice-Chancellor and Dean, Professor Robin Gauld, also attended the award ceremony to show his support for the students.

“The GEE is an extraordinary initiative that we are proud to be associated with at Otago Business School,” Professor Gauld says.

“Our participating students are partnered with students from multiple developing countries working on entrepreneurial solutions to societal problems.

“They learn how to work together in an online environment, while applying what they have learned in their business studies.

“The award ceremony in Parliament was an extremely proud time for our students and staff.”