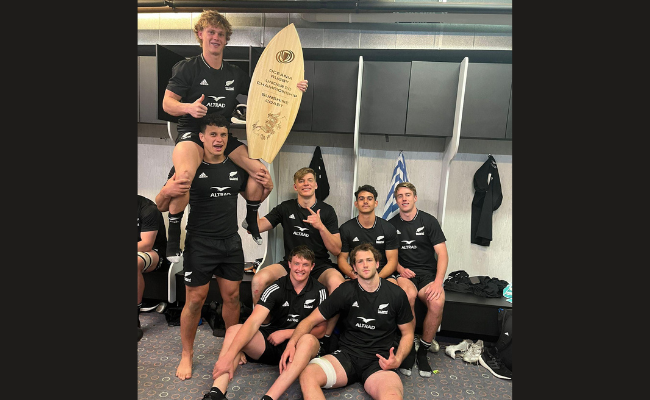 The New Zealand Under20 team recently competed at the Oceania Rugby Under20 Championship.

Among them were students Fabian Holland, Cameron Millar, Noah Hothan and Oliver Haig who most recently have been playing for the Highlanders Under20s.

The team travelled to the Sunshine Coast where they won three games, against Argentina, Fiji and Australia, which Bachelor of Applied Science student Cameron diplomatically calls “pretty cool.”

“It was great to go to Australia and play outside of Dunedin for a bit. Playing rugby against different countries was a new feeling.”

The team’s travels took them to Hastings for training, on to Brisbane for a warmup game and then to Sunshine Coast for the three matches.

“One highlight is getting to see old friends and make new friends,” says Bachelor of Applied Science student Noah.

“It’s the fun part of rugby - playing against your friends then playing with your friends, for me that is the highlight of the sport.”

Cameron says the boys are returning to their regional teams for the National Provisional Competition season.

“It’s a bit of a balance, training hard for rugby and then coming home from long days and watching lectures.”

BSci Exercise and Sport Science/Sport and Exercise Nutrition student Fabian agrees, saying there’s an art to balancing rugby with study, but it is important to do so for his future.

“For me personally, rugby is my number one passion but it’s important to have something to chip away so that after your rugby career you have another career-move.”

History and Politics student Oliver says while travelling and making friends were highlights of this experience, there is another event that stands out – the moment they discovered their teammate’s hidden talent.

“After our game against Fiji we were walking down the street and saw a pie-eating contest. Cam decided to enter it,” Oliver laughs.

“He ate over 50 pies in two minutes. We don’t know where he put it all and there were some pretty weird flavours too.”