Closer to home than some may think 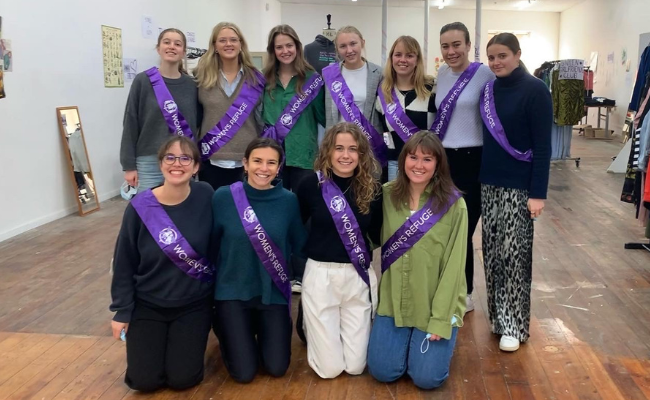 A rising number of students are making use of the services of Te Whare Pounamu Women’s Refuge, which brings fundraising for the organisation a little closer to home, the student organisers of an annual campaign say.

Law students Caccia Armstrong, Carrie Wooller, Rebecca Bridgman and Jess Iggo say they are being once again blown away by huge support from the wider community for their fundraising efforts.

They are members of the Te Whare Pounamu Women’s Refuge Appeals Week Committee, which has been running month-long events in support of the charity for the past eight years, raising thousands of dollars in the process.

This year is set to be no different.

Last year the team raised over $44,000 and the success of the events so far this year suggest it will well and truly beat that record this year.

Even a failed EFTPOS machine did not stop the clothes flying off the shelves at their recent designer clothing pop-up sale.

“Because the EFTPOS machine stopped working we can’t say for certain how much that event raised, but so far the tally says about $11,000,” Carrie says.

Over the course of July and August, the team have five more events planned, including an auction, a quiz night, a gig at UBar and bake sales.

“This year we have been blown away by the donations for the auction which attracts lots of the professional population of Dunedin. There are luxury accommodation packages and other amazing items up for grabs. I think we are going to have to close ticket sales as there have been so many people keen to register, it’s a really exciting response.”

Caccia says while the events run through July and August, the fundraising initiative itself is a year-long commitment.

“We start working on it from March. Once the event is done there are still logistics to sort out. It’s not a simple task.”

While the initiative relies on hundreds of volunteer hours and plenty of coordination, Caccia says it’s hugely rewarding and the feedback from the Refuge is positive.

“We had some of the Refuge workers come and chat with our volunteers last week and they shared with us their plans to use funds raised this year to get new beds for their safe houses.

“Because of the time of year when we run this it means we raise money which can help with providing warm clothes, bedding and non-perishables.”

The team recognise Women’s Refuge helps people who may be a little closer to home than some may think.

“At the start of the year the Refuge shared with us how they have a rising number of students they support,” says Carrie.

“Statistically, where 1 in 3 women will experience family harm in New Zealand, it’s not hard to understand that someone in your social circles will be impacted and need the help of the Refuge at some point.

“Not only this, but Women’s Refuge look after children, those who identify as female and non-binary people affected.”

Jess says the appeals are an important part of the work they do as students.

“It feels good as a Uni student to do this. We learn about these statistics in our studies but now we can be congruent and do something practical to help.”

While the popup shop event has finished, there are still plenty of other exciting events to check out for Te Whare Pounamu Women’s Refuge Appeals Week this year.