Student duo search for the mark of their ancestors 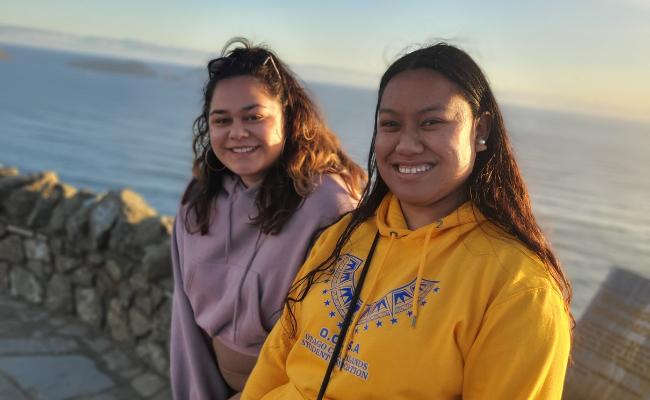 Cook Islanders have called Dunedin home since the 1960s, but their presence is not well-documented.

Student researchers Tiare Makanesi and Emma Samuels have set out to unearth these histories as a part of the ‘Akapapa’anga nо̄ te iti tangata: Stories from the Cook Islands Community project.

Tiare and Emma realised early in their investigation that historical records of a thriving Cook Islands community in the Southern city were few and far between.

Emma says this project has involved a mixture of archival research and interviews with elders who have been in Dunedin for “well over 50 years”.

“We’re trying to gather all this information so that we can see why our Mama and Papa decided to immigrate, not just to New Zealand but to Dunedin. Why Dunedin?”

They noticed that most of the materials in the Hocken archive were artifacts brought to Dunedin from the Islands, which Tiare says “didn’t really have anything to do with the experiences of the Cook Islands community”.

This meant the duo had to think laterally about how they approached this research.

They found accounts of Cook Islanders living in Dunedin from interviews with those external to the culture.

“One woman spoke about her Cook Islander friend who invited her to church, and she learned Cook Islands dance,” Emma says.

“Cook Islanders float under the radar but have such a welcoming and strong presence that for some reason the people in these interviews felt the need to mention it.”

Emma says the Hocken was instrumental in laying the foundations for the project.

“It helped us find the basis of where we were at and guided us to what we still needed to get.”

Their research will be presented at a community showcase, and Emma says it will then be up to the community to decide what they want to do with it.

“I think they wanted to do a booklet. We just wanted to create a resource that will paint a picture of what happened here in Dunedin,” she says.

They hope this research will help Cook Islanders settling in the city in the future connect with their ancestors and their culture.

“Some people choose not to pass down their culture when they settle here,” Emma says.

“That’s fine, it’s all up to them, but then it’s the younger generations that have to search for it. We wanted to create a resource that could help with that.”

Tiare says this project has been formational in finding her own cultural identity.

“That was the big thing for me; learning about where I come from, who I am and who my family are.

“Once you learn these things, you form that connection.”

The final publication and collected data will be stored in the Hocken.

Tiare and Emma Samuels have been a team since childhood.

“I’ve known Tiare since we were little kids. Growing up we did kapa haka group together, we got jobs at the same supermarket, we even spent a part of our childhoods living together,” Emma says.

The pair are now serving as the President and Vice-President of the Otago Cook Islands Student Association (OCISA), and will leave a meaningful legacy behind them.

“I committed OCISA to depositing our exec photos and ephemera to the Hocken,” Emma says.

“I think it’s important for the Uni students that come here to see that this group was here, and all the awesome things that they too could be a part of.”