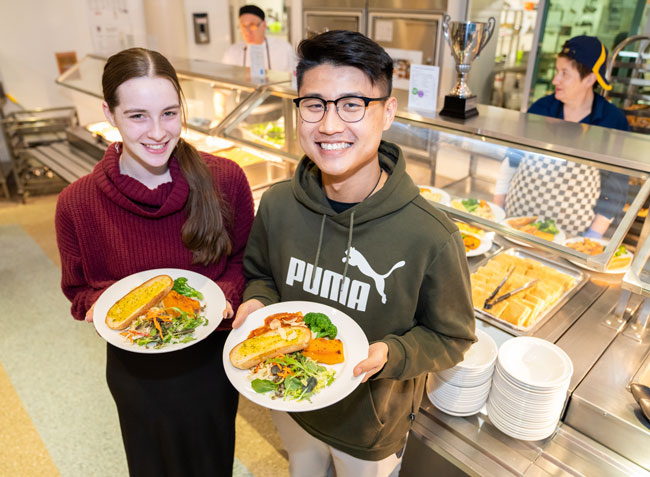 Not having red meat or chicken on our student college menus on Mondays is saving about the same amount of carbon as getting 133 cars off the road annually.

The Mindful Monday menus are reducing the University colleges’ carbon footprint for getting food to the door, Head of Sustainability Ray O’Brien says.

That’s particularly important because food purchasing emissions were the fourth largest category of carbon emissions across our University in a 2019 audit, and college Mindful Mondays are estimated to reduce that 4500t-CO2e total by about 500t-CO2e annually.

Ray is basing that calculation on the fact when one person has a meat-free a week, it cuts their carbon emissions by 11 per cent for that week, which was the finding of research by Otago Environmental Health Associate Professor Alex Macmillan and Jonathon Drew, who was a Health Sciences honours student at the time.

When Mindful Mondays were introduced partway through students’ college experience about September last year, their reactions were mixed. But resistance is usually part of change and seems to have decreased this year as it has become the norm.

The University needs “to lead into a lower emissions future, and for students, it’s part of the learning from being here at Otago”, Ray says.

University Union Catering Manager Gary McNeill says: “I’m proud to say when Ray O’Brien started (at Otago), I was the first person to contact him – it was the day before he started, I’d got the dates wrong”.

Gary is keen for the University’s kitchens to operate as sustainably as possible, and Mindful Mondays are “not only about doing ‘good practice,’ they’re about education”.

The biggest challenge is probably keeping some students who have been brought up eating meat at every meal satisfied.

But catering staff’s sustainability journey did not start with Mindful Mondays and will not finish there.

Practices they have already worked to introduce include: