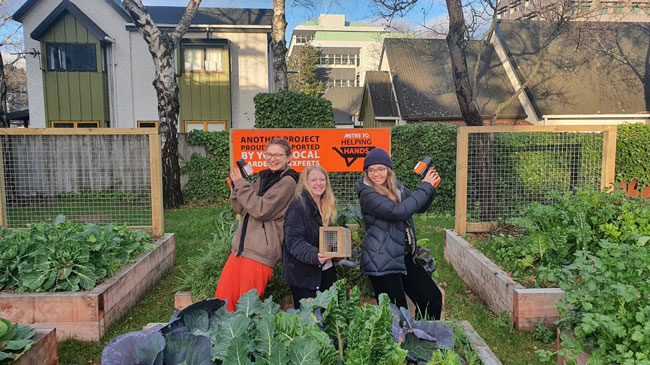 Living in the University’s Sustainability Neighbourhood has shown students how easy it is to make sustainable changes – and given them easy opportunities to learn new sustainability skills to use in their future lives.

The favourite quick-win discovery for Jessie Barron, Aleida Powell and Tessa Dalgety-Evans is bokashi composting, which ‘pickles’ food scraps in bins rather than letting them decay in the traditional way, so the compost does not smell.

“In the past with flatting, you know it’s temporary, you’re there for a year. The cool thing is that we’re here for a year but the (Sustainability Neighbourhood) project’s not.”

All three students plan to keep using the system as often as possible wherever they are because it is small and portable.

The trio has spent almost a year in the Sustainability Neighbourhood for 20 students, which is in three neighbouring University-owned Great King Street buildings.

When Jessie’s application for the neighbourhood was accepted, the microbiology and medical laboratory science student was most excited about the ‘homey’ feel she would get from using her vegetable gardening skills.

Then she started going to the monthly neighbourhood workshops and became most keen on them as she learned “new skills for life,” – including how to compost and look after the worm farm in the backyard.

Energy management student Aleida uses vegetables from the garden most days – “it’s really exciting, just having it in the backyard” – and enjoys showing the garden to friends, but she is most excited about having beehives in the backyard.

“I don’t know anyone that has bees.”

She also likes feeding food scraps to the worms rather than throwing them out.

For Tessa, being in the garden enriches her day – “I really enjoy working in the garden. It’s a great little daily ritual to connect in with the āhua (vibe) of the day.”

The English, linguistics, Māori studies and music student has also been sharing some of the abundant celery with students in a neighbouring flat.

Tessa’s favourite workshops were on soil health and predator trapping, while she has also appreciated residents with maths and statistics skills calculating which products are the most sustainable to buy during the regular shopping trips.

Aleida says living with like-minded people means they get to bounce ideas off each other, plan work together, and make the most of each other’s different interests and strengths.

All three students say the neighbourhood’s 20 residents have varying levels of commitment to sustainability which can make accomplishing some tasks a bit trickier but has probably been helpful for working out ways to influence more reluctant students in our overall University community to become more sustainable.

Jessie says: “Students get a bad ‘rep’ but I think there are people out there who want to do things more sustainably.”

Aleida says: “In the past with flatting, you know it’s temporary, you’re there for a year. The cool thing is that we’re here for a year but the (Sustainability Neighbourhood) project’s not.”

Tessa says: “It could go on for another 10 to 15 years, that would be pretty cool to see.”

Jessie, Aleida and Tessa are all unsure if they will be back next year for various reasons, including relocating for a course placement, still needing to decide about whether to pursue further study and finances.

Aleida says it will be hard to leave – “it’s a really superior way of flatting.”

She’s enjoyed her flat’s environment so much this year she’s been choosing to spend more time there, and the sustainability project is many residents’ ‘baby.’

“You don’t want to let it go … we’ve watched the garden come from nothing”.

All three students think it would be good for some residents to stay next year to share the knowledge they have gained with new residents, and all three would recommend joining the neighbourhood.

University of Otago Head of Sustainability Ray O’Brien says this year has focussed on setting up the neighbourhood, and a biodiversity study in the backyard will record how it has changed during the year.

Next year, a four-bed flat will be added to the neighbourhood from our stock of University Flats (UniFlats) and if there is the demand, a six-bed will be added as well.

Anyone who wants to become a resident next year, can apply here.